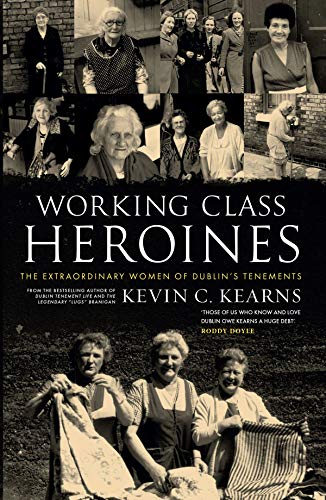 In Working Class Heroines acclaimed historian Kevin C. Kearns brings us the voices of the forgotten women of Dublin's tenements. If it weren't for his work the lives of these everyday heroines would be lost forever. Based on 30 years of research spent interviewing and recording the life stories of the working-class women of Dublin, it covers the squalid tenement days of the early 1900s, through the mid-century decades of 'slumland' block flats, and into the 1970s when deadly drugs infiltrated poor neighbourhoods, terrifying mothers and stealing away their children. What emerges is an intimate and poignant celebration of the mammies and grannies who held the fabric of family life in an environment of hardship and, often, cruelty.

Through vivid tales of how they coped with grinding poverty, huge families, pitiless landlords, the oppressive Church, dictatorial priests, feckless and often abusive husbands, these remarkable women shine with astonishing dignity, wit, pride and a resilient spirit, despite their struggles.

Working Class Heroines gives voice and pays tribute to the long silent, unsung heroines who were the indispensable caretakers of both family and community, and remains one of the most important Irish feminist documents of our times.

The ordinary woman has long been absent from our national narrative. I think we should be grateful that Working Class Heroines exists, and we can benefit now from listening to these voices.' Ellen Coyne, The Sunday Times

Those of us who know and love Dublin owe Kearns a huge debt. Roddy Doyle

Praise for Kevin Kearns' other unique oral histories of Dublin

'A revealing portrait not just of a passionate and dedicated public figure, but also of a society undergoing great and constant change.' The Irish Independent

This story might have come from some Polar Expedition. It is almost unbelievable that such conditions could exist in Ireland.' The Irish Times

The Bombing of Dublin's North Strand, 1941: The Untold Story

'What shines through is the courage and goodness of ordinary people, untrained for such catastrophe, in their attempts to save and help their fellow Dubliners.' The Irish Times

'Among the finest books ever written about Dublin.' The Sunday Tribune

'This is truly an admirable book, capturing echoes of a vanished world. It is only by reading this book that I was enabled to re-imagine the society which the respondents recalled to Kevin Kearns during what must have been many hundreds of hours of patient interviewing.' The Irish Times

'This book will long stand as the definitive social history of Ireland's gulags, where the poor were herded together in conditions worse than animals and will hopefully serve as further inspiration to those who still campaign for decent housing for all our citizens.' Joe Duffy

'Those of us who know and love Dublin owe Kearns a huge debt.' Roddy Doyle

'This book is a goldmine of tiny details. The narrative voices that speak from every page of this book do so in an unfiltered language entirely their own.' The Sunday Times

Kevin C. Kearns, PhD, is a social historian and Professor Emeritus at the University of Northern Colorado. He has written thirteen books on Dublin, most notably Dublin Tenement Life, which was No. 1 on The Irish Times bestseller list for many weeks. Other books include Ireland's Arctic Siege and The Legendary Lugs Branigan. He now lives on the coast of Maine.

GOR010281355
9780717183517
0717183513
Working Class Heroines: The Extraordinary Women of Dublin's Tenements by Kevin C. Kearns
Kevin C. Kearns
Used - Very Good
Paperback
Gill
20180914
256
N/A
Book picture is for illustrative purposes only, actual binding, cover or edition may vary.
This is a used book - there is no escaping the fact it has been read by someone else and it will show signs of wear and previous use. Overall we expect it to be in very good condition, but if you are not entirely satisfied please get in touch with us
Trustpilot