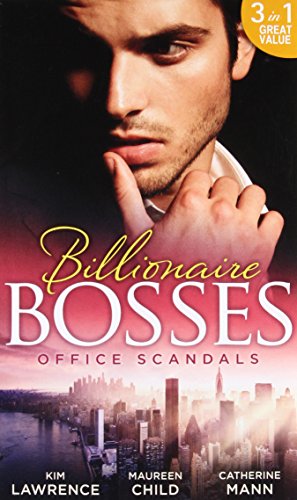 Interior designer Isabel Carter has been offered her dream job. But it comes with a catch: her new employer is Roman Petrelli. Three years ago, one scorching night with brooding Roman came with consequences...and now, Roman is determined to claim his heir by any means necessary...

When scandal threatens the luxury auction house that bears his family's name, Vance Waverly can't help suspecting that his gorgeous assistant, Charlotte Potter, could be involved. And there's one way to find out: seduce the truth out of her!

To clear her name, events planner Hillary has agreed to go undercover as brooding billionaire Troy Donavan's date. The stakes are high, and Hillary knows she needs to focus on the job. But Troy's kisses are like molten sin...and being sensible in the face of such desire is simply not an option...

Kim Lawrence was encouraged by her husband to write when the unsocial hours of nursing didn't look attractive! He told her she could do anything she set her mind to, so Kim tried her hand at writing. Always a keen Mills & Boon reader, it seemed natural for her to write a romance novel - now she can't imagine doing anything else. She is a keen gardener and cook and enjoys running on the beach with her Jack Russell. Kim lives in Wales. Maureen Child is the author of more than 130 romance novels and novellas that routinely appear on bestseller lists and have won numerous awards, including the National Reader's Choice Award. A seven-time nominee for the prestigous RITA award from Romance Writers of America, one of her books was made into a CBS-TV movie called THE SOUL COLLECTER. Maureen recently moved from California to the mountains of Utah and is trying to get used to snow. USA Today bestseller Catherine Mann has books in print in more than 20 countries with Desire, Romantic Suspense, HQN and other Harlequin lines. A five-time RITA finalist, she has won both the RITA and the Bookseller's Best Awards. Catherine resides in Florida with her aviator husband, their four children and a menagerie of pets. For more information, visit: http://catherinemann.com

GOR007362049
Office Scandals: The Petrelli Heir / Gilded Secrets / An Inconvenient Affair by Kim Lawrence
Kim Lawrence
Used - Very Good
Paperback
HarperCollins Publishers
2016-02-25
560
0263917916
9780263917918
N/A
Book picture is for illustrative purposes only, actual binding, cover or edition may vary.
The book has been read but remains in clean condition. All pages are intact and the cover is intact. Some minor wear to the spine.