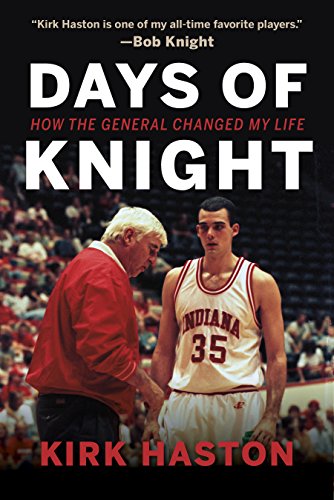 Days of Knight by Kirk Haston

Days of Knight: How the General Changed My Life by Kirk Haston

What happens when a 6' 9" kid from Lobelville, Tennessee is recruited by legendary basketball coach Bob Knight? Kirk Haston's life was changed forever with just a two-minute phone call. Containing previously unknown Knight stories, anecdotes, and choice quotes, fans will gain an inside look at the notoriously private man and his no-nonsense coaching style. Which past Hoosier basketball greats returned to talk to and practice with current teams? How did Knight mentally challenge his players in practices? How did the players feel when Knight was fired? In this touching and humorous book, Haston shares these answers and more, including his own Hoosier highs-shooting a famous three-point winning shot against number one ranked Michigan State-and lows-losing his mom in a heartbreaking tornado accident. Days of Knight is a book every die-hard IU basketball fan will treasure.

"Kirk Haston is one of my all-time favorite players." -Bob Knight "Here's a Bet You Didn't Know, Hoosier Fan: among IU's 3-year career players, only Scott May, Archie Dees and Walt Bellamy outscored Kirk Haston; only Bellamy, Dees and Steve Downing outrebounded him. And none of those Hoosier all-timers was blessed and cursed with the emotional peaks and valleys that Kirk went through in his IU years. His mother was a school teacher, an English teacher. She would have been very proud of the excellence her son shows here as a writer, and-thanks to her urging to be a note-taker-as an inside observer of the most tumultuous years in recent IU athletics." -Bob Hammel, author of The New York Times Best Seller, Knight: My Story and Beyond the Brink with Indiana: 1987 NCAA: Champions and member of the Indiana Basketball Hall of Fame "People don't realize the type of positive impact Coach Knight has had over the years.This book not only gives a true depiction of his greatness as a coach, but it also gives a true depiction of his greatness as an individual who cares about others." -Calbert Cheaney, Indiana Hoosier 1989-93, former Washington Wizard, assistant coach at St. Louis University "I've been a fan of Kirk for a long time, going back to his high school days, when Tom Izzo and I tried to recruit him at MSU. Kirk is a person and player who has EARNED everything he's gotten out of basketball. He has always had a rare work capacity and it carried him a long, long way. He was also very hungry and humbled in his pursuit to be successful with a desire to be coached and taught. It shows up in this book." -Coach Tom Crean, Indiana Hoosiers "I really enjoyed this book. It was very detailed and brought back tons memories. Fans wanting to know both the competitive and compassionate sides of Knight should definitely read Days of Knight." -A.J. Guyton, Indiana Hoosiers 1996-2000, 2000 All-American, Former Chicago Bull "I've always had the ultimate respect for Coach Knight as one of the great coaching minds of our time. When I was a young coach, he took me under his wing and provided valuable knowledge, just as he had with so many of his players. Thanks to Kirk Haston, a player I once recruited and have always appreciated, readers will gather insight as to what made Coach Knight successful, while also offering a view to a side of him that not all of us were fortunate enough to see." -Coach Tom Izzo, Michigan State Spartans "Days of Knight is a great look at how Coach Knight made the young players he coached better men first and better players second. It's a personal glimpse into at how the legendary Indiana basketball coach taught and mentored his team." -Jared Jeffries, Indiana Hoosiers 2000-2002, member of the 2002 NCAA runner-up team, former New York Knick "I've read lots of words about Bobby Knight, but never from one of his players. I can't wait to read this." -Tony Kornheiser, co-host of ESPN's Pardon the Interruption and former sportswriter for The Washington Post "Coach Knight is a complex man with a very clear vision. Through a vast array of techniques and emotions, Days of Knight is an incredible inside look at Coach Knight's version of teaching the game of life and basketball. Most importantly, we see all sides of a fascinating leader and a brilliant tactician." -Dane Fife, Indiana Hoosiers 1998-2002, member of the 2002 NCAA runner-up team, assistant coach at Michigan State "This is an outstanding read. Kirk has done a great job of portraying the very unique relationship that is player/coach. This book will take you inside one of the most storied college basketball programs and give you insight into one of the game's greatest coaches." -Michael Lewis, Indiana Hoosiers 1997-2000, Hoosiers all-time assists leader, assistant coach at University of Nebraska "Coach Knight stories and teachings are in the veins of Indiana-and they are in the pages of Days of Knight. Filled with previously unheard knight stories and quotes, this book gives an inside look at what it was like to be a player who experienced the final three seasons of the Knight era at Indiana. If you are a Hoosier fan, you're going to want to read this book." -Jeff Overton, Indiana Hoosier 2002-2005, PGA Tour player, member of the 2010 U.S. Ryder Cup Team "Haston paints an intense picture of what it takes to be an Indiana Hoosier and provides an inside look at the most controversial news story in IU history-the firing of Coach Bob Knight." -Stan Sutton, retired sports journalist

Kirk Haston was a member of the Indiana Hoosiers basketball team from 1997-2001 who played for the legendary Bob Knight. Haston was named to the 2001 Associated Press All-America Team and the 2000 and 2001 All-Big Ten Teams. Post-college, he played for the Charlotte Hornets.

Acknowledgements
Introduction
1. If the Game Doesn't FitThen You Didn't Commit
2. Tennessee Knight Game
3. The Day after Knight
4. Welcome to B-Town Greenhorn
5. A Hall of Fame Kind of Day
6. Hoosier Family Counseling
7. Talking About Practice
8. This isAssembly Hall
9. Close to Greatness & Close to Great Failures
10. Let the Games Begin
11. Phone Call
12. A Parachute Policy?
13. Friendship Tolerance
14. #1 Comes to Town
15. Day Camp and Knight Chat
16. Image Is Something, But Not Everything
Bibliography

NLS9780253022271
9780253022271
0253022274
Days of Knight: How the General Changed My Life by Kirk Haston
Kirk Haston
New
Paperback
Indiana University Press
2016-08-29
224
N/A
Book picture is for illustrative purposes only, actual binding, cover or edition may vary.
This is a new book - be the first to read this copy. With untouched pages and a perfect binding, your brand new copy is ready to be opened for the first time
Trustpilot