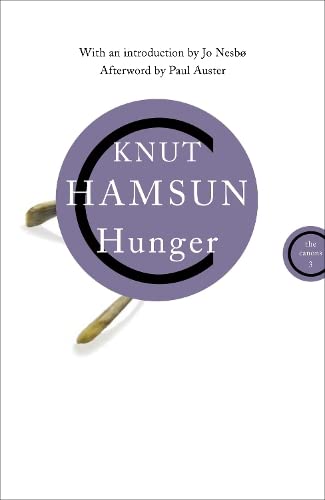 Lying awake in his attic room, a young aspiring writer prepares himself for the day ahead. He dresses and then descends into the unforgiving streets of Kristiana - one of many journeys he will come to make through this strange city, looking for inspiration and sustenance. As the narrator's behaviour becomes increasingly irrational and absurd, the reader is drawn deeper into his intense world. Written in 1980, Hunger is Hamsun's first novel, a disturbing and darkly humorous masterpiece of existential fiction that anticipated and influenced much twentieth-century fiction, including the work of Camus, Kafka and Fante. In 1920, Hamsun won the Nobel Prize for Literature.

Hunger is the crux of Hamsun's claims to mastery. This is the classic novel of humiliation, even beyond Dostoevsky * * Observer * *
One of the most disturbing novels in existence * * Time Out * *
An excellent new translation . . . this Hunger deserves to be the standard English version * * Times Literary Supplement * *
Hamsun has the qualities that belong to the very great, a complete omniscience on human nature -- Rebecca West
Disturbing and difficult as this nightmarish novel is, it is a work of imaginative brilliance that resonates in our own day * * Herald * *
Hunger is undoubtedly one of the most important novels of the modern age. At last it has found a translator capable of doing justice to its immense power and complexity: Lyngstad's deserves to become the standard English version -- Duncan McClean

Knut Hamsun was born in Norway in 1859. Hunger was his first novel. He went on to write many works of fiction, including Mysteries, Pan and Victoria. He died in 1952, and since then a growing number of readers have been drawn to his work for its extraordinary qualities of insight and imagination. Sverre Lyngstad has translated a number of Knut Hamun's novels. He is the recipient of several awards and honours, including the St Olav Medal and the Knight's Cross, First Class, of the Royal Norwegian Order of Merit. He died in 2011. Jo Nesbo is a musician, songwriter, economist and author. His first crime novel featuring Harry Hole was published in Norway in 1997 and was an instant hit, winning the Glass Key Award for best Nordic crime novel (an accolade shared with Peter Hoeg, Henning Mankell and Stieg Larsson).

GOR004201021
Hunger by Knut Hamsun
Knut Hamsun
Canons
Used - Very Good
Paperback
Canongate Books Ltd
2011-08-18
272
0857861794
9780857861795
N/A
Book picture is for illustrative purposes only, actual binding, cover or edition may vary.
This is a used book - there is no escaping the fact it has been read by someone else and it will show signs of wear and previous use. Overall we expect it to be in very good condition, but if you are not entirely satisfied please get in touch with us.