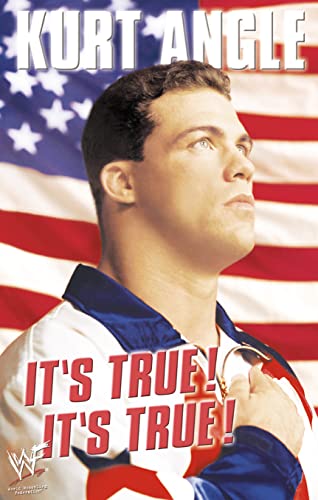 It's True! It's True!
by Kurt Angle

From the Junior National Freestyle Championship to the 1996 summer Olympics, Kurt Angle's achievements are second to none in the world of professional wrestling.

From the Junior National Freestyle Championship to the 1996 summer Olympics, Kurt Angle's achievements are second to none in the world of professional wrestling.

In the tradition of the successful World Wrestling Federation autobiographies from Mankind and The Rock, comes the inspiring true story of Kurt Angle, Olympic gold medalist and WWF World Title holder.

Angle followed in the footsteps of his four older brothers when he began his wrestling career over 23 years ago. He won the Junior National Freestyle Championship in 1987 and went on to become Wrestler of the Year at Clarion College in 1990. In 1996, with many prestigious wrestling honors to his credit, Angle set his sights on the ultimate prize, an Olympic Gold medal.

Angle's impressive combination of discipline and confidence secured him his opportunity to compete on team USA during the Atlanta games. From the Olympics, Angle took his gold medal and uncompromising dedication to the WWF. There he taught the other wrestlers and his audience about the three I's: Integrity, Intelligence, and Intensity.

His role at the WWF is "The Most Celebrated, First Real, Athlete in World Wrestling Federation History." Angle's unique combination of integrity, intelligence, and intensity set him on a winning streak which culminated in the capture of the Intercontinental Belt and the World Title.

Angle is walking, talking, wrestling proof that hard work and determination and the key elements of success.

Kurt Angle is a World Wrestling Federation superstar and an Olympic gold medalist.

John Harper is a sportswriter for the New York Daily News and the co-author of The Worst Team Money Could Buy. He lives in New Jersey.

GOR001078426
It's True! It's True! by Kurt Angle
Kurt Angle
Used - Very Good
Paperback
HarperCollins Publishers
2002-09-16
416
0007145071
9780007145072
N/A
Book picture is for illustrative purposes only, actual binding, cover or edition may vary.
This is a used book - there is no escaping the fact it has been read by someone else and it will show signs of wear and previous use. Overall we expect it to be in very good condition, but if you are not entirely satisfied please get in touch with us.