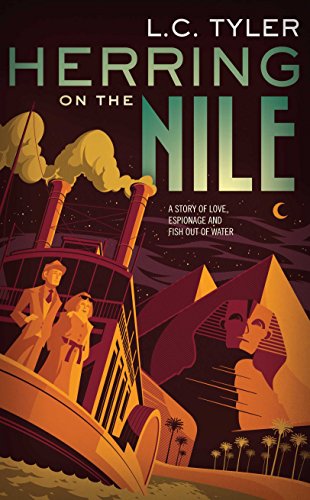 Herring on the Nile
by L. C. Tyler

Out of Stock
$14.49
inc. GST
A story of murder, espionage, and fish out of water
Very Good
Only 0 left

Herring on the Nile Summary

Herring on the Nile by L. C. Tyler

In an effort to rejuvenate his flagging career, crime novelist Ethelred Tressider decides to set his new book in Egypt and embarks on a `research trip' with his literary agent, Elsie Thirkettle, in tow. No sooner has their cruise on the Nile begun, however, than an attempt is made on Ethelred's life.

When the boat's engine explodes and a passenger is found bloodily murdered, suspicion falls on everyone aboard - including a third-rate private eye, two individuals who may or may not be undercover police, and Ethelred himself. As the boat drifts out of control, though, it seems that events are being controlled by a party far more radical than anyone could have guessed.

Herring on the Nile is an ingenious mystery, and a darkly funny tribute to Agatha Christie and the golden age of crime fiction.

L. C. Tyler was born in Essex and educated in Southend and at Oxford University. He has worked in Hong Kong, Malaysia, Sudan, Denmark, Norway, Sweden and Finland. He currently lives in Islington with his wife, children and border terrier.

GOR003032779
Herring on the Nile by L. C. Tyler
L. C. Tyler
Used - Very Good
Hardback
Pan Macmillan
2011-07-01
272
0230714692
9780230714694
Short-listed for CrimeFest Awards Goldsboro Last Laugh Award 2012 (UK)
Book picture is for illustrative purposes only, actual binding, cover or edition may vary.
This is a used book - there is no escaping the fact it has been read by someone else and it will show signs of wear and previous use. Overall we expect it to be in very good condition, but if you are not entirely satisfied please get in touch with us.