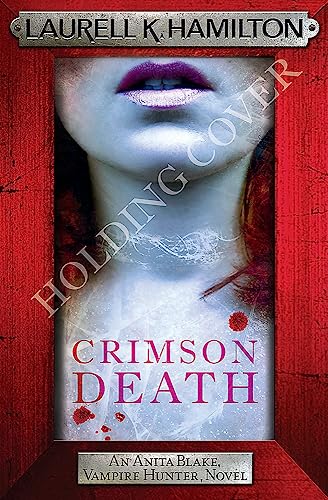 In her twenty-fifth adventure, vampire hunter and zombie raiser Anita Blake learns how far she'll go to save someone she loves...

In Crimson Death, the twenty-fifth Anita Blake, Vampire Hunter, adventure by Sunday Times and New York Times bestselling author Laurell K. Hamilton, Anita is tested like never before in a showdown that will delight readers of Charlaine Harris and Anne Rice.

Some say love is a great motivator, but hatred gets the job done, too.

My name is Anita Blake. I'm a vampire hunter and necromancer, and I'm about to learn that evil is in the eye of the beholder...

I've never seen Damian, my vampire servant, so vulnerable. He's being bombarded with violent nightmares and blood sweats, but now is the time I need him most. The ruthless vampire who created him might be losing control, allowing rogue vampires to run wild and break one of their kind's few strict taboos.

I'm joining forces with my friend Edward to stop the carnage, and Damian will be at our side, even if it means travelling to a place that couldn't be less welcoming to a vampire, an assassin and a necromancer.

'Hamilton remains one of the most inventive and exciting writers in the paranormal field' * Charlaine Harris *
'Anita Blake is one of the most fascinating fictional heroines since Scarlett O'Hara' * Publishers Weekly *
'What The Da Vinci Code did for the religious thriller, the Anita Blake series has done for the vampire novel' * USA Today *
'A hardcore guilty pleasure' * The Times *
Laurell K. Hamilton is the bestselling author of the acclaimed Anita Blake, Vampire Hunter, Novels. She lives near St Louis with her husband, her daughter, two dogs and an ever-fluctuating number of fish. She invites you to visit her website at www.laurellkhamilton.org.
GOR008554244
9781472241771
1472241770
Crimson Death by Laurell K. Hamilton
Laurell K. Hamilton
Anita Blake, Vampire Hunter, Novels
Used - Very Good
Paperback
Headline Publishing Group
2017-03-09
720
N/A
Book picture is for illustrative purposes only, actual binding, cover or edition may vary.
This is a used book - there is no escaping the fact it has been read by someone else and it will show signs of wear and previous use. Overall we expect it to be in very good condition, but if you are not entirely satisfied please get in touch with us
Trustpilot