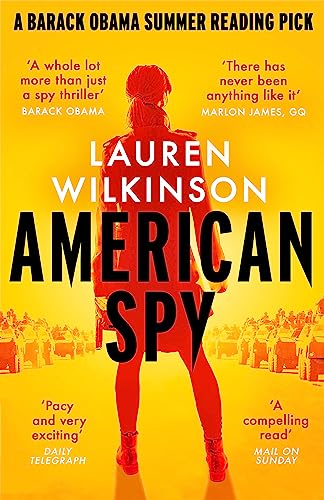 Chosen as a 'book of the year' by Daily Telegraph, The Times, Time magazine, Sunday Times Crime Club and the Guardian.

SHORTLISTED FOR THE 2019 CENTRE FOR FICTION FIRST NOVEL PRIZE

What if your sense of duty required you to betray the man you love?

It's 1986, the heart of the Cold War. Marie Mitchell is an intelligence officer with the FBI. She's brilliant and talented, but she's also a black woman working in an all-white boys' club, and her career has stalled with routine paperwork - until she's recruited to a shadowy task force aimed at undermining Thomas Sankara, the charismatic, revolutionary president of Burkina Faso, whose Communist ideology has made him a target for American intervention.

In the year that follows, Marie will observe Thomas, seduce him, and ultimately, have a hand in the coup that will bring him down. But doing so will change everything she believes about what it means to be a spy, a lover, and a good American.

Lauren Wilkinson grew up in New York City and lives in the Lower East Side. She earned her MFA in Fiction and Literary Translation from Columbia University and has taught writing at Columbia and the Fashion Institute of Technology. She has received writing fellowships from the Center for Fiction and the MacDowell Colony, and her fiction has appeared in Granta.

GOR010675637
American Spy: a Cold War spy thriller like you've never read before by Lauren Wilkinson
Lauren Wilkinson
Used - Very Good
Paperback
Little, Brown Book Group
2020-07-02
304
0349700982
9780349700984
Short-listed for International Thriller Writers Award 2020 (UK)
Book picture is for illustrative purposes only, actual binding, cover or edition may vary.
This is a used book - there is no escaping the fact it has been read by someone else and it will show signs of wear and previous use. Overall we expect it to be in very good condition, but if you are not entirely satisfied please get in touch with us.