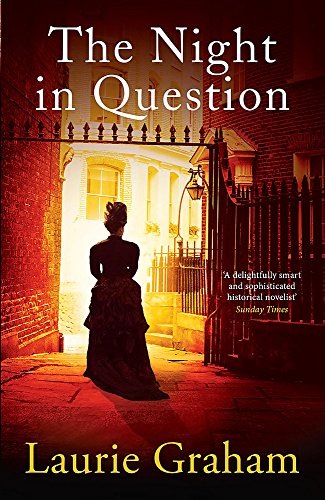 The Night in Question by Laurie Graham

London, the 1880s, and Jack the Ripper is at large. Two childhood friends meet again having found very different fortunes in the fog-bound, Ripper-stalked streets of Victorian London, in the new novel from the acclaimed Laurie Graham

The Night in Question by Laurie Graham

London, the 1880s, and Jack the Ripper is at large. Two childhood friends meet again having found very different fortunes in the fog-bound, Ripper-stalked streets of Victorian London. Plain but witty Dot is a music hall star; pretty Kate (Eddowes, a true-life Ripper victim) has fallen on hard times.

When star of London's Victorian music hall, Dot Allbones, bumps into her childhood friend Kate Eddowes outside the Griffin theatre in Shoreditch, it's a blast from the past. The two grew up together in the Midlands, but life has treated them very differently since then.

Told through the eyes of the irreverent Dot, this is the story of a London populated by chancers, some rich, some destitute. During one hot summer in the 1880s Whitechapel famously became the scene of unspeakable horror, and Kate Eddowes found a grisly fame that would far outshine Dot's.

Because out there, in the stews of East London, Saucy Jack is sharpening his knife . . .

Poignant and unsentimental, Dot's whiplash humour had me cheering * Daily Mail *
The sheer panache with which Graham conjures up the era's music halls ... is particularly appealing and the author is to be congratulated on creating a story in which, for once, a victim of the Ripper rather than the East End bogeyman himself takes centre stage * Sunday Times *
[Graham's] strength is the voice of her narrator, Dot ... a wonderful companion * The Times *
Another gem from the should-be-bigger-than-Jesus Laurie Graham * Red Magazine *
Laurie Graham is a former Daily Telegraph columnist and contributing editor of She magazine. The author of several acclaimed novels, most recently The Grand Duchess of Nowhere and The Night in Question (2015), Laurie lives in Dublin. Visit her website at www.lauriegraham.com
GOR007866938
9781782069775
1782069771
The Night in Question by Laurie Graham
Laurie Graham
Used - Very Good
Paperback
Quercus Publishing
2016-09-01
368
N/A
Book picture is for illustrative purposes only, actual binding, cover or edition may vary.
This is a used book - there is no escaping the fact it has been read by someone else and it will show signs of wear and previous use. Overall we expect it to be in very good condition, but if you are not entirely satisfied please get in touch with us
Trustpilot