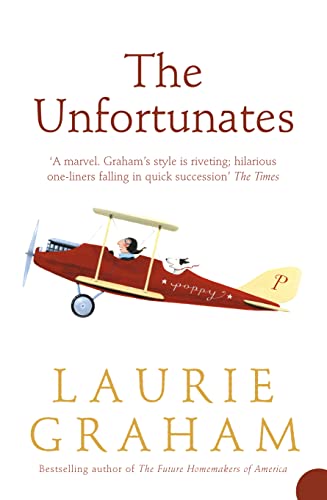 The Unfortunates by Laurie Graham

Reissue of a classic novel from the bestselling author of 'The Future Homemakers of America'.

The Unfortunates by Laurie Graham

Reissue of a classic novel from the bestselling author of 'The Future Homemakers of America'.

What hope is there for Poppy Minkel? She has kinky hair, out-sticking ears, too yellow a neck and an appetite for fun, and her mother Dora despairs of ever finding her a husband, despite the Minkel's Mustard fortune that seasons these dubious attractions. When Daddy disappears, Poppy's tendency to the unusual is quietly allowed to flourish. World War I opens new horizons. With never a moment of self-doubt, she invents her own extraordinary life in step with the unfolding century.

Praise for 'The Unfortunates':

'It is a marvel. Graham's style is riveting, hilarious one-liners falling in quick succession.' Anthea Lawson, The Times

'My unputdownable book of the year. I laughed and cried.' Shereen Nanjiani, Sunday Herald

'An irrepressible adventurer, Poppy is a comic combination of innocence and pluck, but although this is a brisk, breezy read, it's also a novel with serious bite.' Hephzibah Anderson, Daily Mail

'Laurie Graham is a writer with a remarkably malleable comic voice.' Alex Clark, The Guardian

'Fresh, funny and smart, a novel that reels from the Titanic to jazz age New York.' Observer

'This wildly funny novel ... is often on the brink of being a wildly tragic one.' The Sunday Times

'Poppy Minkel is a wonderfully original, naive character, and Graham injects her with the same eccentric humour all her protagonists share, making it impossible not to love her. A fantastic, engrosssing read.' Glamour

Laurie Graham is the author of eight novels. 'The Ten O'Clock Horses' was shortlisted for the Encore Award and dramatized for Radio 4, as was 'Perfect Meringues'. Laurie is a former Daily Telegraph columist and contributing editor to She magazine, and wrote the bestselling 'Parents' Survival Guide'. In addition to her novels, she writes original dramas and adaptations for BBC Radio. Her ten-episode dramatization of 'Little Women' was broadcasted on Woman's Hour.

GOR001551265
9780007234066
0007234066
The Unfortunates by Laurie Graham
Laurie Graham
Used - Very Good
Paperback
HarperCollins Publishers
2006-07-03
384
N/A
Book picture is for illustrative purposes only, actual binding, cover or edition may vary.
This is a used book - there is no escaping the fact it has been read by someone else and it will show signs of wear and previous use. Overall we expect it to be in very good condition, but if you are not entirely satisfied please get in touch with us
Trustpilot