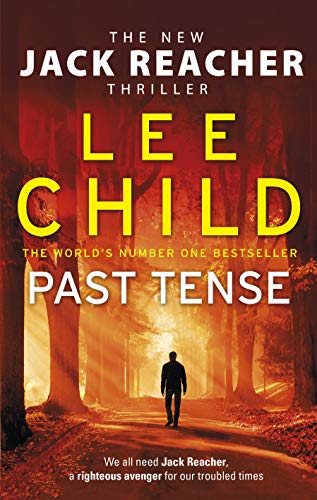 Past Tense
by Lee Child

The most hotly anticipated thriller of the year follows our hero Jack Reacher on a quest into his father's past, and climaxes in the most blood-curdling ticking time bomb of an adventure yet.

A young couple trying to get to New York City are stranded at a lonely motel in the middle of nowhere. Before long they're trapped in an ominous game of life and death.

Meanwhile, Jack Reacher sets out on an epic road trip across America. He doesn't get far. Deep in the New England woods, he sees a sign to a place he has never been - the town where his father was born. But when he arrives he is told no one named Reacher ever lived there. Now he wonders- who's lying?

As the tension ratchets up and these two stories begin to entwine, the stakes have never been higher for Reacher.

That's for damn sure.

"Absolutely loved Past Tense - Lee Child just gets better and better, which is a very rare quality in a writer of a long-run series. Whip smart, always compelling, always fun, he is dangerously addictive." -- Peter James
"Jack Reacher is today's James Bond, a thriller hero we can't get enough of" -- Ken Follett
"I loved it. One of the best." -- Jonathan Ross
"It's Lee Child. Why would you not read it?" -- Karin Slaughter
"Sometimes you just want someone who can beat the s*** out of people! I pick up Jack Reacher when I'm in the mood for someone big to solve my problems" -- Patricia Cornwell

Lee Child is one of the world's leading thriller writers. He was born in Coventry, raised in Birmingham, and now lives in New York. It is said one of his novels featuring his hero Jack Reacher is sold somewhere in the world every nine seconds. His books consistently achieve the number-one slot on bestseller lists around the world and have sold over one hundred million copies. Two blockbusting Jack Reacher movies have been made so far. He is the recipient of many awards, most recently Author of the Year at the 2019 British Book Awards, the CWA's Diamond Dagger for a writer of an outstanding body of crime fiction, the International Thriller Writers' ThrillerMaster, and the Theakstons Old Peculier Outstanding Contribution to Crime Fiction Award.

GOR009781878
Past Tense: (Jack Reacher 23) by Lee Child
Lee Child
Jack Reacher
Used - Like New
Paperback
Transworld Publishers Ltd
2018-11-05
416
0593078209
9780593078204
N/A
Book picture is for illustrative purposes only, actual binding, cover or edition may vary.
The book has been read, but looks new. The book cover has no visible wear, and the dust jacket is included if applicable. No missing or damaged pages, no tears, possible very minimal creasing, no underlining or highlighting of text, and no writing in the margins.