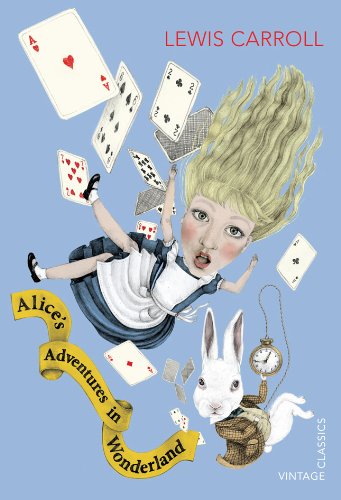 Used Price
$16.49
inc. GST
Free Shipping in Australia
CELEBRATE 150 YEARS OF ALICEOh my ears and whiskers, how late its getting! She meets a disappearing cat, plays croquet with a bad-tempered Queen, joins a mad Hatter's tea party and becomes entangled in the case of some missing tarts.
Reviews:
Trustpilot
Very Good

CELEBRATE 150 YEARS OF ALICE Oh my ears and whiskers, how late its getting! Would you be surprised to see a white rabbit take a watch out of his waistcoat pocket? It certainly seems a remarkable sight to Alice and, full of curiosity, she follows him down a rabbit-hole into a very strange world. She meets a disappearing cat, plays croquet with a bad-tempered Queen, joins a mad Hatter's tea party and becomes entangled in the case of some missing tarts. In Wonderland nothing but out-of-the-way things happen... Includes Through the Looking Glass. BACKSTORY: Learn about the author and what inspired him to create Wonderland, and try writing some nonsense verse!

"Only Lewis Carroll has shown us the world upside down the way a child sees it, and has made us laugh as children laugh" -- Virginia Woolf
"Precise, dream-like, subversive" -- Quentin Blake * Independent on Sunday *
"The clue to the enduring fascination and greatness of the Alice books lies in language. . .. It is play, and word-play, and its endless intriguing puzzles continue to reveal themselves long after we have ceased to be children" -- A. S. Byatt
"Without these two books in my childhood I doubt whether my imagination would have developed at all" -- Kate Atkinson
""What is the use of a book" thought Alice "without pictures or conversation?" If you feel the same way, then you'll love Alice's Adventures in Wonderland. It is full of good conversations. Alice talks to a pipe-smoking caterpillar and a mad hatter" -- Chris Riddell

Lewis Carroll's real name was Charles Lutwidge Dodgson. He was born on 27th January 1832 at Daresbury in Cheshire. He studied at Christ Church, Oxford University and later became a mathematics lecturer there. He wrote Alice's Adventures in Wonderland (1865) and Through the Looking Glass (1872) for the daughters of the Dean of Christ Church. He was very fond of puzzles and some readers have found mathematical jokes and codes hidden in his Alice books. His other works include Phantasmagoria and Other Poems (1869), The Hunting of the Snark (1876), Rhyme? And Reason? (1882), The Game of Logic (1887) and Sylvie and Bruno (1889, 1893). Dodgson was also an influential photographer. He died on 14th January 1898.

GOR004687835
Alice's Adventures in Wonderland by Lewis Carroll
Lewis Carroll
Used - Very Good
Paperback
Vintage Publishing
2012-08-01
368
0099572923
9780099572923
N/A
Book picture is for illustrative purposes only, actual binding, cover or edition may vary.
This is a used book - there is no escaping the fact it has been read by someone else and it will show signs of wear and previous use. Overall we expect it to be in very good condition, but if you are not entirely satisfied please get in touch with us.