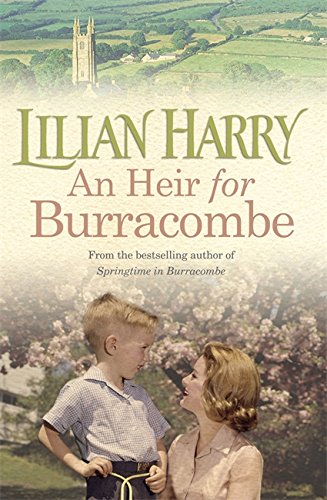 An Heir for Burracombe
by Lilian Harry

An Heir for Burracombe Summary

An Heir for Burracombe by Lilian Harry

There's nowhere quite like Burracombe - a village full of warmth and intrigue...

It's a summer's day in 1953 that turns Hilary Napier's life upside down. When Marianne, a beautiful French woman, knocks on her door, Hilary can't help but be struck by Robert, the young boy with her. He has the same eyes as the brother she lost in the war. As she listens to Marianne's sad tale, she realises that her soldier brother lives on in the son he never met. But this is only the first revelation...

As the village of Burracombe tries to make sense of the strangers in their midst, there is also much to celebrate. A wedding is being planned, a birth is imminent and a courtship just beginning. Yet, as always, life is complicated, and some people must learn cruel truths about the world...

Customer Reviews - An Heir for Burracombe

An Heir for Burracombe Reviews

Lilian Harry takes her readers on another wonderful journey... * WESTERN DAILY PRESS *
For fans of Lilian Harry, this latest book does not disappoint. * TELEGRAPH & ARGUS *

Lilian Harry grew up in Gosport, on the shores of Portsmouth Harbour, and now lives on the edge of Dartmoor with two miniature schnauzers who allow her just enough room on the sofa. She is a keen bellringer and walker, and enjoys taking part in village life. Her daughter and two grandchildren live nearby. Follow Lilian on Twitter @LilianHarry or visit www.orionbooks.co.uk to find out more.

GOR002473370
An Heir for Burracombe by Lilian Harry
Lilian Harry
Burracombe Village
Used - Very Good
Paperback
Orion Publishing Co
2011-02-03
400
1409120120
9781409120124
N/A
Book picture is for illustrative purposes only, actual binding, cover or edition may vary.
This is a used book - there is no escaping the fact it has been read by someone else and it will show signs of wear and previous use. Overall we expect it to be in very good condition, but if you are not entirely satisfied please get in touch with us.