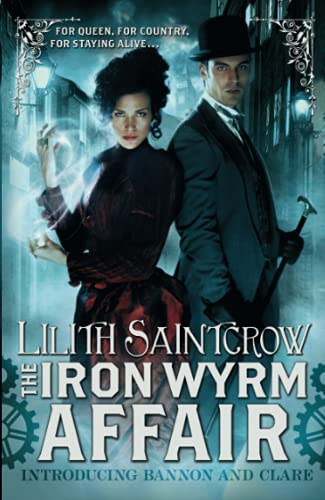 The Iron Wyrm Affair: Bannon and Clare: Book One by Lilith Saintcrow

The game is afoot!

London's geniuses are being picked off by a vicious killer, and Emma Bannon, a sorceress in the service of the Empire, must protect the next target, Archibald Clare. Unfortunately he's more interested in solving the mystery of the murders than staying alive . . .

In a world where illogical magic has turned the Industrial Revolution on its head, Bannon and Clare will face dark sorcery, cannon fire, high treason and the vexing problem of reliably finding hansom cabs in the city.

Lilith Saintcrow's foray into steampunk plunges the reader into a Victorian England rife with magic and menace, where clockwork horses pace the cobbled streets, dragons rule the ironworks, and it will take a sorceress' discipline and a logician's powers of deduction to unravel a bloody conspiracy. -- Jacqueline Carey 20111107 Saintcrow melds a complex magic system with a subtle but effective steampunk society, adds fully-fleshed and complicated characters, and delivers a clever and highly engaging mystery that kept me turning pages, fascinated to the very end. -- Laura Anne Gilman

Lilith Saintcrow was born in New Mexico, bounced around the world as an Air Force brat, and fell in love with writing when she was ten years old. She currently lives in Vancouver, WA with two small children and a houseful of cats. Oh. And a husband too.

GOR004761754
The Iron Wyrm Affair: Bannon and Clare: Book One by Lilith Saintcrow
Lilith Saintcrow
Bannon and Clare
Used - Very Good
Paperback
Little, Brown Book Group
2012-07-31
336
0356500926
9780356500928
N/A
Book picture is for illustrative purposes only, actual binding, cover or edition may vary.
This is a used book - there is no escaping the fact it has been read by someone else and it will show signs of wear and previous use. Overall we expect it to be in very good condition, but if you are not entirely satisfied please get in touch with us.