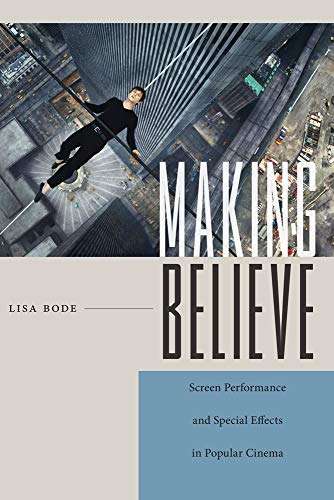 Used Price
$53.99
inc. GST
Free Shipping in Australia
With the rise of digital effects in cinema the human performer is increasingly the only "real" element on screen. Making Believe sheds new light on screen performance by historicizing it within the context of visual and special effects cinema and technological change in filmmaking, through the silent, early sound, and current digital eras.
Very Good

In the past twenty years, we have seen the rise of digital effects cinema in which the human performer is entangled with animation, collaged with other performers, or inserted into perilous or fantastic situations and scenery. Making Believe sheds new light on these developments by historicizing screen performance within the context of visual and special effects cinema and technological change in Hollywood filmmaking, through the silent, early sound, and current digital eras.

Making Believe incorporates North American film reviews and editorials, actor and crew interviews, trade and fan magazine commentary, actor training manuals, and film production publicity materials to discuss the shifts in screen acting practice and philosophy around transfiguring makeup, doubles, motion capture, and acting to absent places or characters. Along the way it considers how performers and visual and special effects crew work together, and struggle with the industry, critics, and each other to define the aesthetic value of their work, in an industrial system of technological reproduction. Bode opens our eyes to the performing illusions we love and the tensions we experience in wanting to believe in spite of our knowledge that it is all make believe in the end.

"In this expansive and historically-informed study, Lisa Bode provides a wise and illuminating account of the intersection of actors with cinema technology in all its myriad forms."--Stephen Prince "author of Digital Visual Effects in Cinema: The Seduction of Reality"
"This is one of the best and most nuanced discussions of performance and acting in the digital era that I have read or will ever hope to read."--Adrienne L. McLean "author of Dying Swans and Madmen: Ballet, the Body, and Narrative Cinema"

Lisa Bode is a lecturer in film and television studies at the University of Queensland.


1 Acting Through Machines: Fidelity and Expression from Cameras to Mo-Cap

2 Behind Rubber and Pixels: Mimesis, Seamlessness, and Acting Achievement

3 In Another's Skin: Typecasting, Identity, and the Limits of Proteanism

5 Performing with Themselves: Versatility, Timing, and Nuance in Multiple Roles

6 There Is No There There: Making Believe in Composite Screen Space

GOR010743036
Making Believe: Screen Performance and Special Effects in Popular Cinema by Lisa Bode
Lisa Bode
Techniques of the Moving Image
Used - Very Good
Paperback
Rutgers University Press
2017-07-30
218
081357997X
9780813579979
N/A
Book picture is for illustrative purposes only, actual binding, cover or edition may vary.
This is a used book - there is no escaping the fact it has been read by someone else and it will show signs of wear and previous use. Overall we expect it to be in very good condition, but if you are not entirely satisfied please get in touch with us.