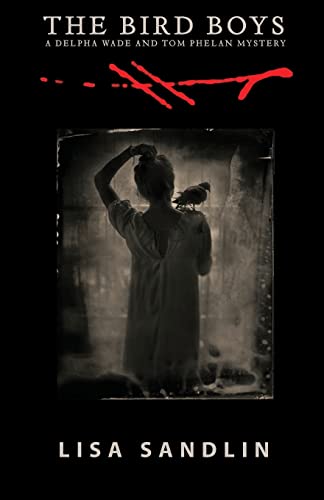 The Bird Boys by Lisa Sandlin

Sometimes the truth is not the truth, but murder is always murder. Which of the brothers carries the bloody knife?

The Bird Boys by Lisa Sandlin


The new novel from award-winning author Lisa Sandlin catches up with the almost-murdered secretary Delpha Wade (The Do-Right, 2015, set in 1973) as she's released from a hospital in order to be tucked into the back seat of a police cruiser. Her boss, P. I. Tom Phelan, sets out to spring her. He needs her back in his investigation business, where he'll soon be chasing a skulking grand larcenist and plotting how to keep a ganjapreneur out of the grabby hands of a brand new agency, the D.E.A. Delpha digs through old records and knocks on strange doors to unravel the dangerous case of two brothers with beaucoup aliases-verifying that sometimes truth is not true, but murder is always murder.

Like her award-winning debut, The Do-Right (2015), also starring Delpha Wade, Sandlin sequel soars on the wings of its its spot-on evocation of a time and place and its utterly compelling central charcters, Delpha and Tom, as their mutual respect and trust grows along with a dash of sexual tension. A first-rate series crying for word-of-mouth support...-Michele Leber, Booklist
In Sandlin's second to feature her ex-con-turned-private-eye Delpha and her sympathetic boss Phelan, the two take on a case involving blood, brothers, and Beaumont's darkest secrets. The Texan on staff is confident in saying that Lisa Sandlin's series is the best thing to ever come out of Beaumont.-Most Anticipated Crime Books of 2019, CrimeReads
What sounds like an ordinary PI caper, though, becomes something elevated, poignant, and complex in this beautifully written novel...Sandlin has crafted an outstanding series that readers will want to follow and savor.-STARRED review, Kirkus Reviews
[W]hat makes this crime novel soar is the humanity and humility of its main characters. It is by turns exciting, tender, suspenseful, observant, and gently funny. Readers will eagerly await the next installment.-Publishers Weekly
Sandlin knows the craft, no question. Her writing is finely cultivated; we can feel we intimately know her characters. And Sandlin's story is classic swindle, surprise, murder and coppers before P.O.S.T certification and ethics panels.-Jeffrey Mannix, The Durango Telegraph
Its characters, wit, exquisite prose, and sense of redemption are so richly crafted that they'll stick to most anyone like, well, a shirt to your skin on an August afternoon in Beaumont.-Robert Faires, The Austin Chronicle
Another perfectly penned novel by a master of the mystery/suspense genre, The Bird Boys is a wonderfully entertaining read from cover to cover and certain to be an enduringly popular addition to community library collections. -Midwest Book Review
Ex-con Delpha Wade and her PI boss sizzle in 'The Bird Boys,' Lisa Sandlin's terrific follow-up to 'The Do-Right.' Subtle, sexy, tender, and smart, 'The Bird Boys' lovingly recreates Beaumont, Texas in the 1970s: the crooks, the cops, and regular folks just trying to get by. Brimming with hard-boiled dialogue and poetic insights alike, 'The Bird Boys' is a deeply humane and provocative book that builds relentlessly to its chilling conclusion.-Joy Castro, author of Hell or High Water

With phrasing to linger over but pacing that presses forward, The Bird Boys will have readers racing to grab the first book and crossing fingers for more of the dynamite characters inhabiting this noir series. -Lauren O'Brien, Shelf Awareness

Lisa Sandlin was born in Beaumont, Texas, and grew up in oil-refinery air, sixty miles from the Gulf of Mexico. She raised a son in Santa Fe, New Mexico, then taught writing at the University of Nebraska for twenty years. She has since returned to Santa Fe. The Do-Right-her first novel-won the 2015 Hammett Award from the IACW/NA and the Best First Private Eye Prize from the Seamus Awards.
NGR9781947627130
9781947627130
1947627139
The Bird Boys by Lisa Sandlin
Lisa Sandlin
A Delpha Wade and Tom Phelan Mystery
New
Paperback
Cinco Puntos Press,U.S.
20190905
306
null null null null null null null null null null
Book picture is for illustrative purposes only, actual binding, cover or edition may vary.
This is a new book - be the first to read this copy. With untouched pages and a perfect binding, your brand new copy is ready to be opened for the first time
Trustpilot