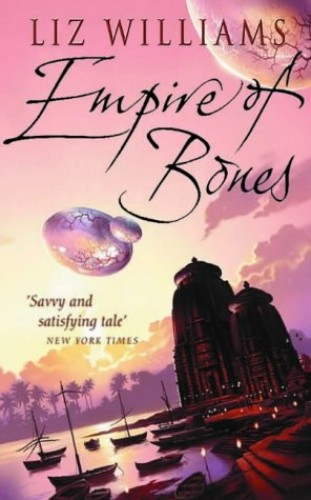 Empire of Bones
by Liz Williams

Empire of Bones by Liz Williams

A bold and provocative novel of the future. Millions of years ago, alien beings seeded Earth with their genetic strands to create a new outpost of intelligent life. Now their descendants have returned to Earth's skies, drawn by their detection of a Receiver, a human with the genetic ability to tap into alien communications. It is the signal that Earth is ready to be absorbed into a vast galactic empire.

Jaya Nihalani has been a prophet, a crusader, and terrorist fighting for the rights of her own despised Untouchable caste. Now she lies in an Indian hospital, dying of a hideous disease. Her head is filled with voices and visions; her body is aging rapidly, inexplicably. But the voices and visions are no disease. Jaya is the Receiver whom the aliens intend to heal, enlighten ...and use. Soon the subcontinent erupts in riots and chaos as powerful forces attempt to co-opt the enigmatic alien emissaries, and a shocked world await sits fate. Jaya must somehow discover the plans of her perfect and powerful 'friends'. Have they come to end human suffering, or to make it worse? Should she help them -- or lead the impossible fight against them?

'Crafted and polished science fiction, with an involving cast of characters - easily strong enough never to be upstaged by the astonishing an ingenious plot, sets and technology' Tanith Lee

'Crafted and polished science fiction, with an involving cast of characters - easily strong enough never to be upstaged by the astonishing an ingenious plot, sets and technology' Tanith Lee

One of the rising stars of British SF, Liz Williams is the daughter of a stage magician and a gothic novelist, and currently lives in Glastonbury. She received a PhD in Philosophy of Science from Cambridge, and her subsequent career has ranged from reading tarot cards on the Palace Pier to teaching in central Asia. Her fifth book, Banner of Souls was nominated for the Philip K Dick Award and the Arthur C Clarke Award.

GOR001643728
Empire of Bones by Liz Williams
Liz Williams
Used - Very Good
Paperback
Pan Macmillan
2003-06-20
432
0330413236
9780330413237
N/A
Book picture is for illustrative purposes only, actual binding, cover or edition may vary.
This is a used book - there is no escaping the fact it has been read by someone else and it will show signs of wear and previous use. Overall we expect it to be in very good condition, but if you are not entirely satisfied please get in touch with us.