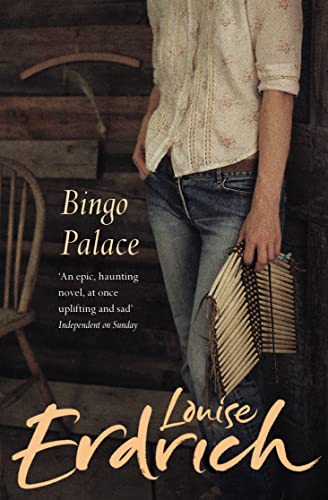 The Bingo Palace
by Louise Erdrich

The Bingo Palace by Louise Erdrich

Seeking direction and enlightenment, Lipsha Morrissey, a charismatic young drifter, answers his grandmother's summons to return to his birthplace. As he tries to settle into a challenging new job on the reservation, he falls passionately in love for the first time. But the object of his desire, the beautiful Shawnee Ray, is in the midst of deciding whether to marry his boss, the wealthy reservation entrepreneur, Lyman Lamartine.

Matters are further complicated when Lipsha discovers that Lyman is his rival in more ways than one. In league with an influential group of aggressive businessmen, Lyman has chosen to open a gambling complex on reservation land - a development which threatens to destroy the community's fundamental links with the past...

`Louise Erdrich is the most interesting American novelist to have appeared in years.' Philip Roth

'Beautiful ... `The Bingo Palace' shows us a place where love, fate and chance are woven together like a braid.' New York Times

`In its empathy, its poetry and its sheer narrative power, 'The Bingo Palace' confirms Erdrich as one of the greatest composers writing today.' Independent on Sunday

'The power of Louise Erdrich's writing lies in the clear access she has to her characters' thoughts and feelings, and her ability to translate those feelings into words that are both poetic and unforced. `The Bingo Palace' is a beautiful novel, mysterious and revelatory, from a powerful American voice.' Erica Wagner, The Times

GOR002174030
The Bingo Palace by Louise Erdrich
Louise Erdrich
Used - Very Good
Paperback
HarperCollins Publishers
1994-11-29
304
0006547095
9780006547099
N/A
Book picture is for illustrative purposes only, actual binding, cover or edition may vary.
This is a used book - there is no escaping the fact it has been read by someone else and it will show signs of wear and previous use. Overall we expect it to be in very good condition, but if you are not entirely satisfied please get in touch with us.