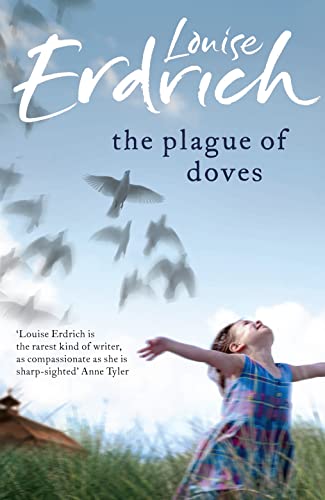 The Plague of Doves
by Louise Erdrich

A beautiful, compelling, utterly original new novel from one of the most important American writers of our time, and winner of the National Book Award for Fiction, 2012

The Plague of Doves Summary

The Plague of Doves by Louise Erdrich

A beautiful, compelling, utterly original new novel from one of the most important American writers of our time, and winner of the National Book Award for Fiction, 2012

Pluto, North Dakota, is a town on the verge of extinction. Here, everybody is connected - by love or friendship, by blood, and, most importantly, by the burden of a shared history.

Growing up on the reservation is Evelina Harp, witty and ambitious, and prone to falling hopelessly in love. Listening to her grandfather's tales, she learns of a horrific crime that has marked both Ojibwe and whites. Nobody understands it better than Judge Antone Bazil Coutts, who keeps watch over Pluto's inhabitants and recounts their lives with compassion and rare insight.

Louise Erdrich's sense of the comic and the tragic sweeps readers along to the surprising conclusion of this stunning novel, a portrait of the complex allegiances, passions and drama of a haunting land and its all-too-human people.

The Plague of Doves Reviews

`Louise Erdrich's imaginative freedom has reached its zenith - `The Plague of Doves' is her dazzling masterpiece.' Philip Roth

'A masterly new novel ... Writing in prose that combines the magical sleight of hand of Gabriel Garcia Marquez with the earthy, American rhythms of Faulkner, Ms. Erdrich ... has written what is arguably her most ambitious - and in many ways, her most deeply affecting - work yet.' Michiko Kakutani, New York Times

`Confirms her reputation as a writer able to combine the apocalyptic with the mundane world whose inhabitants are set loose to roam the heavens in spirit but are ballasted always by their defiantly human bodies.' Observer

'You could read Louise Erdrich's latest book for its wisdom ... Or you could read `The Plague of Doves' for its poetry ... in the end, you'll read this book for its stories ... The stories told by her characters offer pleasures of language, of humor, of sheer narrative momentum, that shine even in the darkest moments of the book.' Boston Globe

'Wholly felt and exquisitely rendered tales of memory and magic ... By the novel's end, and in classic Erdrich fashion, every luminous fragment has been assembled into an intricate tapestry that deeply satisfies the mind, the heart, and the spirit.' O magazine

GOR001630978
The Plague of Doves by Louise Erdrich
Louise Erdrich
Used - Very Good
Paperback
HarperCollins Publishers
2008-05-05
356
0007270763
9780007270767
N/A
Book picture is for illustrative purposes only, actual binding, cover or edition may vary.
This is a used book - there is no escaping the fact it has been read by someone else and it will show signs of wear and previous use. Overall we expect it to be in very good condition, but if you are not entirely satisfied please get in touch with us.