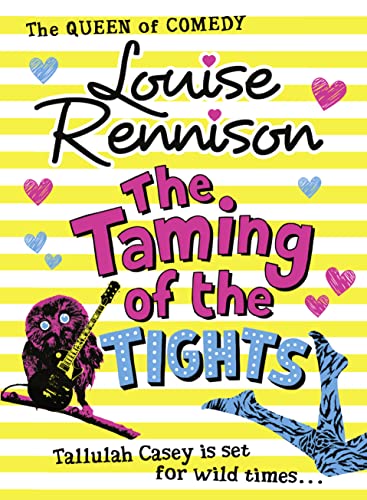 The Taming Of The Tights
by Louise Rennison

Used Price
$15.49
inc. GST
Free Shipping in Australia
Let your tights run wild and free in the hilarious conclusion to this laugh-out-loud series. From the original Queen of Comedy!
Reviews:
Trustpilot
Very Good

The Taming Of The Tights Summary

The Taming Of The Tights (The Misadventures of Tallulah Casey, Book 3) by Louise Rennison

Let your tights run wild and free in the hilarious conclusion to this laugh-out-loud series. From the original Queen of Comedy!

Tallulah Casey is putting all thoughts of wild-boy Cain behind her. He is literally an animal in trousers... oo-er! Not like nice-boy Charlie (who she's totally not thinking about either).

The Tree Sisters are chasing those golden slippers of applause at performing arts college but Dr Lightowler seems hell-bent on spoiling everything for Tallulah.

And with all her mates loved-up, can Tallulah resist the call of her wild-boy?

Customer Reviews - The Taming Of The Tights

The Taming Of The Tights Reviews

"It's all a hoot." - Nicolette Jones, Sunday Times

"I don't know how, but Louise Rennison has done it again. Tallulah is even funnier, warmer, and sweeter than her cousin Georgia Nicolson. I fell in love with Withering Tights, and you will too!" - Meg Cabot, author of The Princess Diaries and Abandon series

Praise for Confessions of Georgia Nicolson:

''You'll be falling about laughing at this." - Mizz

GOR006043079
The Taming Of The Tights (The Misadventures of Tallulah Casey, Book 3) by Louise Rennison
Louise Rennison
The Misadventures of Tallulah Casey
Used - Very Good
Paperback
HarperCollins Publishers
2014-01-02
400
000732393X
9780007323937
N/A
Book picture is for illustrative purposes only, actual binding, cover or edition may vary.
This is a used book - there is no escaping the fact it has been read by someone else and it will show signs of wear and previous use. Overall we expect it to be in very good condition, but if you are not entirely satisfied please get in touch with us.