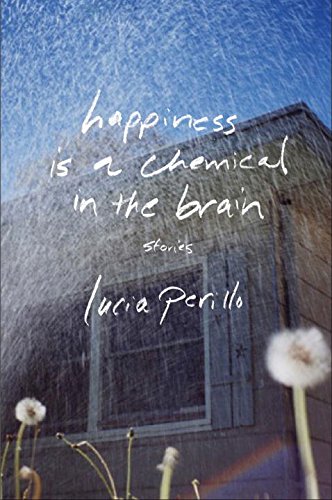 Happiness Is a Chemical in the Brain
by Lucia Perillo

Happiness Is a Chemical in the Brain Summary

Happiness Is a Chemical in the Brain: Stories by Lucia Perillo

Populating a small town in the Pacific Northwest, the characters in Lucia Perillo's story collection all resist giving the world what it expects of them and are surprised when the world comes roaring back.

An addict trapped in a country house becomes obsessed with vacuum cleaners and the people who sell them door-to-door. An abandoned woman seeks consolation in tales of armed robbery told by one of her fellow suburban housewives. An accidental mother struggles to answer her daughter's badgering about her paternity. And in three stories readers meet Louisa, a woman with Down syndrome who serves as an accomplice to her younger sister's sexual exploits and her aging mother's fantasies of revenge.

Together, Happiness Is a Chemical in the Brain is a sharp-edged, witty testament to the ambivalence of emotions, the way they pull in directions that often cancel one another out or twist their subjects into knots. In lyrical prose, Perillo draws on her training as a naturalist and a poet to map the terrain of the comic and the tragic, asking how we draw the boundaries between these two zones. What's funny, what's heartbreaking, and who gets to decide?

Customer Reviews - Happiness Is a Chemical in the Brain

Happiness Is a Chemical in the Brain Reviews

"Lucia Perillo isn't just a strikingly original poet; she's a top-notch fiction writer as well. The stories in this bleakly funny and harrowing collection are reminiscent of both Raymond Carver and Denis Johnson, but the vision than animates them is Perillo's own, unique and unmistakable." -- Tom Perrotta
"Starred review. Emotionally unflinching stories of considerable power, wonder and humor." -- Kirkus Reviews
"Happiness is full of straightforward sentences in straightforward narratives, as you might expect from someone who understands the mechanics of storytelling but hasn't yet written much fiction." -- Adam Plunkett - New York Times Book Review

Lucia Perillo (1958-2016) was the author of seven books of poetry, one of which, Inseminating the Elephant, was a finalist for the Pulitzer Prize. She was also awarded a MacArthur genius grant.

GOR006677079
Happiness Is a Chemical in the Brain: Stories by Lucia Perillo
Lucia Perillo
Used - Very Good
Hardback
WW Norton & Co
2012-05-25
224
0393083535
9780393083538
N/A
Book picture is for illustrative purposes only, actual binding, cover or edition may vary.
This is a used book - there is no escaping the fact it has been read by someone else and it will show signs of wear and previous use. Overall we expect it to be in very good condition, but if you are not entirely satisfied please get in touch with us.