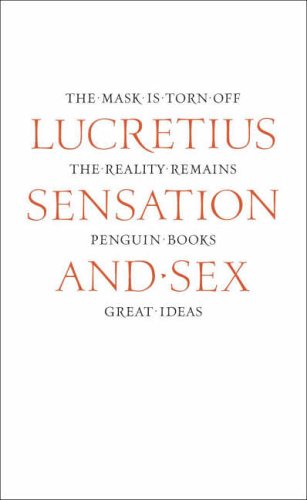 Sensation and Sex
by Lucretius

Sensation and Sex by Lucretius

Throughout history, some books have changed the world. They have transformed the way we see ourselves - and each other. They have inspired debate, dissent, war and revolution. They have enlightened, outraged, provoked and comforted. They have enriched lives - and destroyed them. Now Penguin brings you the works of the great thinkers, pioneers, radicals and visionaries whose ideas shook civilization and helped make us who we are.

Elegant, insightful and startlingly modern, the philosophy of Lucretius deeply influenced the course of European thought; here, he provides one of the first accounts of atomic theory, argues that there can be no life of the soul after death, and explores the sickness that we call love.

Titus Lucretius Carus must have been born soon after 100 BC, and was probably already dead when his poem was given to the world in 55 BC. He was a Roman citizen and a friend of Gaius Memmius, an eminent Roman statesman, and his poem was read and admired by Cicero.

GOR001606343
Sensation and Sex by Lucretius
Lucretius
Penguin Great Ideas
Used - Very Good
Paperback
Penguin Books Ltd
2005-08-25
96
0141023821
9780141023823
N/A
Book picture is for illustrative purposes only, actual binding, cover or edition may vary.
This is a used book - there is no escaping the fact it has been read by someone else and it will show signs of wear and previous use. Overall we expect it to be in very good condition, but if you are not entirely satisfied please get in touch with us.