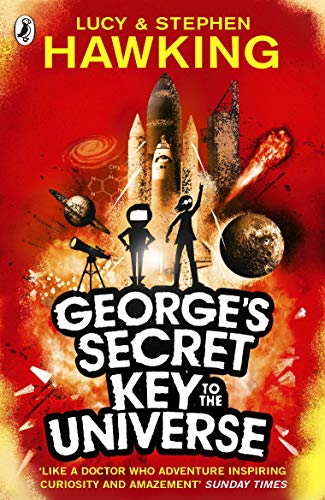 George's Secret Key to the Universe
by Lucy Hawking

George's Secret Key to the Universe by Lucy Hawking

George's pet pig breaks through the fence into the garden next door - introducing him to his new neighbours: the scientist, Eric, his daughter, Annie, and a super-intelligent computer called Cosmos. And from that moment George's life will never be the same again, for Cosmos can open a portal to any point in outer space . . . Written by science educator Lucy Hawking and her father - the most famous scientist in the world - and illustrated by Garry Parsons, George's Secret Key to the Universe will take you on a rollercoaster ride through space to discover the mysteries of our universe.

"It is like a Dr Who adventure, inspiring curiosity and amazement. It makes a case for the relevance and fascination of physics, and for the importance of scientists and eco-warriors working together to save the planet. With a happy circularity, the plot depends on a recent discovery: Hawking Radiation, the leaking of particles out of black holes until they destroy themselves" * The Sunday Times *
"Gripping, informative and funny" * The Bookseller *
"A true beginner's guide to A Brief History of Time" * Publishers Weekly *
"A delightful book for young readers" * Independent *
"A terrific page-turner that will be a revelation to every young reader who has ever looked into the skies and wondered" * Education Today *

Stephen Hawking (Author) STEPHEN HAWKING was a brilliant theoretical physicist and is generally considered to have been one of the world's greatest thinkers. He held the position of Lucasian Professor of Mathematics at the University of Cambridge for thirty years and is the author of A Brief History of Time which was an international bestseller. His other books for the general reader include A Briefer History of Time, the essay collection Black Holes and Baby Universe, The Universe in a Nutshell, The Grand Design, and Black Holes: The BBC Reith Lectures. He died on 14 March, 2018. Lucy Hawking (Author) LUCY HAWKING is the original creator of the George series. She works with world leading scientists, including her co-author and father, Stephen Hawking, to explain complex concepts of science through story telling to young readers. A former journalist, she has written widely for British newspapers. Lucy now gives regular talks about the science and stories of the George series to audiences all over the world.

GOR001333890
George's Secret Key to the Universe by Lucy Hawking
Lucy Hawking
George's Secret Key to the Universe
Used - Very Good
Paperback
Random House Children's Publishers UK
2008-08-01
352
055255958X
9780552559584
N/A
Book picture is for illustrative purposes only, actual binding, cover or edition may vary.
The book has been read but remains in clean condition. All pages are intact and the cover is intact. Some minor wear to the spine.