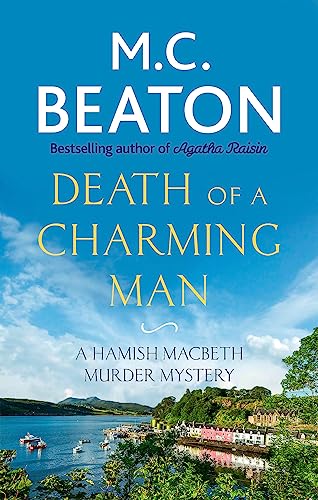 Now that Priscilla Halburton-Smythe has agreed to marry him, Police Sergeant Hamish Macbeth can't imagine a more perfect life. There's not much crime in his remote Scottish village of Lochdubh, nothing much at all to do but fish, drink coffee, and slouch around. And now to spend time with lovely Priscilla.

But his days aren't as tranquil as his dreams. For one thing, Priscilla's renovation schemes are driving him out of his cottage. Not to mention her ambitious plans for his career as a policeman away from Lochdubh. This might be a good time to find out why Peter Hynd's arrival in nearby Drim was causing so much trouble.

An attractive, unmarried man with an independent income would always attract attention in such a small place. But this time Hynd's arrival seems to have caused bitter rivalry among the women of Drim. Hamish finds their petty fights amusing and a clever excuse to avoid Priscilla and her schemes for a new electric stove (to replace his beloved woodburning appliance), a posh new bathroom, and virtuous nutrition. Amusing, that is, until death threats, physical abuse, and murder make statistical history in one of Scotland's most picture postcard-perfect towns.

Beaton's tremendously likable policeman stars here in a tightly wrought tale, with a gem of an ending in which Hamish manages to be both dead right and dead wrong - Publishing NewsBeaton's low-key police procedural doesn't offer white-knuckle suspense, blood and gore, fast-paced action, or stunning climaxes. What it does offer is an intimate look at life in a small Scottish village, striking insights into human nature, carefully detailed, highly accurate descriptions of police work, splendid dry humor, and a story that's as satisfying as a cozy cup of tea. - BooklistThe detective novels of M. C. Beaton, a master of outrageous black comedy, have reached cult status. - The Times
M.C. Beaton (1936-2019) was the author of both the Agatha Raisin and Hamish Macbeth series, as well as numerous Regency romances. Her books have been translated into seventeen languages and have sold more than twenty-one million copies worldwide. She is consistently the most borrowed UK adult author in British libraries, and her Agatha Raisin books have been turned into a TV series on Sky.
GOR009000692
9781472124463
1472124464
Death of a Charming Man by M. C. Beaton
M. C. Beaton
Hamish Macbeth
Used - Very Good
Paperback
Little, Brown Book Group
2017-10-31
320
N/A
Book picture is for illustrative purposes only, actual binding, cover or edition may vary.
This is a used book - there is no escaping the fact it has been read by someone else and it will show signs of wear and previous use. Overall we expect it to be in very good condition, but if you are not entirely satisfied please get in touch with us
Trustpilot