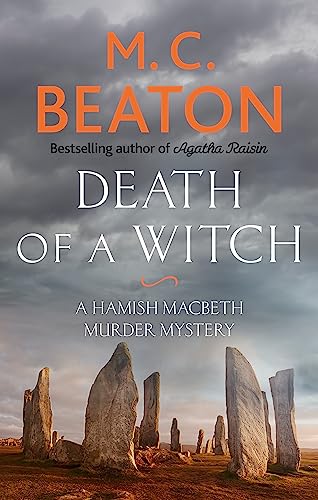 Death of a Witch by M.C. Beaton

The 24th Hamish Macbeth crime mystery, delightfully recovered and re-issued for all the fans of Agatha Raisin.

Death of a Witch by M.C. Beaton

Returning from holiday Hamish becomes unaccountably worried - it's as if he senses a dark cloud of evil hanging over Lochdubh. He soon learns that there is a newcomer to the village, a woman called Catriona Beldame, and that the villagers have decided she is a witch.

At first Hamish is charmed by her, but is dismayed when he finds out she's been supplying dangerous potions to certain local people. No one seems willing to listen to his warnings and when she is found murdered, poor Hamish is the prime suspect. Obviously, he must solve the murder to clear his own name and bring contentment back to his beloved Lochdubh.

Praise for the Hamish Macbeth series:

M.C. Beaton is the internationally bestselling author of both the Agatha Raisin and Hamish Macbeth series, as well as numerous Regency romances. Her books have been translated into seventeen languages and her Agatha Raisin mysteries have been made into a Sky TV series starring Ashley Jensen. M. C. Beaton is consistently the most borrowed UK adult author in British libraries. She lives in a Cotswold village that is very much like Agatha's beloved Carsely.
GOR009935846
9781472124609
147212460X
Death of a Witch by M.C. Beaton
M.C. Beaton
Hamish Macbeth
Used - Very Good
Paperback
Little, Brown Book Group
2019-03-05
320
N/A
Book picture is for illustrative purposes only, actual binding, cover or edition may vary.
This is a used book - there is no escaping the fact it has been read by someone else and it will show signs of wear and previous use. Overall we expect it to be in very good condition, but if you are not entirely satisfied please get in touch with us
Trustpilot