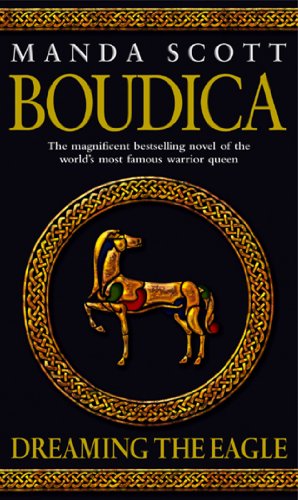 Used Price
$15.49
inc. GST
Free Shipping in Australia
In AD 60, Boudica, war leader of the Eceni, led her people in a final bloody revolt against the occupying armies of Rome. In the company of a supreme storyteller, the reader is plunged into the unforgettable world of tribal Britain in the years before the Romans came: a twilight world of Dreamers and the magic of the gods;
Reviews:
Trustpilot
Very Good Good Well Read

In AD 60, Boudica, war leader of the Eceni, led her people in a final bloody revolt against the occupying armies of Rome. It was the culmination of nearly twenty years of resistance against an occupying force that sought to crush a vibrant, complex civilization and replace it with the laws, taxes and slavery of the Roman Empire. Gloriously imagined, Boudica: Dreaming the Eagle recreates the beginnings of a story so powerful its impact has survived through the ages, recounting the journey to adulthood of Breaca, who at twelve kills her first warrior, and her sensitive, skilful half-brother Ban, who carries with him a vision of the future that haunts his waking hours. In the company of a supreme storyteller, the reader is plunged into the unforgettable world of tribal Britain in the years before the Romans came: a twilight world of Dreamers and the magic of the gods; a world where horses and dogs and the landscape itself become characters in their own right; where warriors fight for honour as much as victory. Above all, it is a world of passion and courage and spectacular, heart-felt heroism pitched against overwhelming odds. Manda Scott's Boudica will tell the extraordinary, resounding story of Britain's first and greatest warrior queen, the woman who remains one of the great female icons - to read it is to discover our history, to learn about ourselves and our heritage.

"Manda Scott has created a fictional universe all her own, but close enough to our reality for it both to warm and break our hearts. Breathtakingly good, it reveals the best and worst in all of us" -- Val McDermid
"The best in the current crop of novels about Rome, its empire and its victims ... never sentimental and always tough-minded" -- Roz Kaveney * Independent *
"Every so often, a book comes along that totally remoulds a historical figure for our own times ... massively impressive" -- Jane Jakeman * Scotland on Sunday *
"A powerful novel, alive with the love, deceit, wisdom and the heroics of humanity" -- Jean M. Auel
"An extraordinary work ... exciting and intriguing, taking you into a world where unbelievable danger and cruelty sit side by side with magic, spirituality and profound human relationships" -- Jenni Murray

is a veterinary surgeon, writer and climber. Born and educated in Scotland, she now lives in Suffolk with two lurchers and too many cats. Known primarily as a crime writer, her first novel, Hen's Teeth was shortlisted for the Orange Prize. Her subsequent novels are Night Mares, Stronger than Death and No Good Deed, for which she was hailed by the Times as 'one of Britain's most important crime writers'. Dreaming the Eagle, the first book in the Boudica series, is also available in Bantam paperback

GOR000554346
Boudica: Dreaming The Eagle: Boudica 1 by Manda Scott
Manda Scott
Boudica
Used - Very Good
Paperback
Transworld Publishers Ltd
2004-02-02
720
0553814060
9780553814064
N/A
Book picture is for illustrative purposes only, actual binding, cover or edition may vary.
This is a used book - there is no escaping the fact it has been read by someone else and it will show signs of wear and previous use. Overall we expect it to be in very good condition, but if you are not entirely satisfied please get in touch with us.