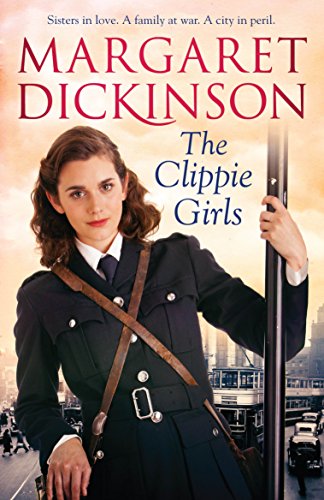 The Clippie Girls
by Margaret Dickinson

The Clippie Girls by Margaret Dickinson

The Clippie Girls is a compelling story of love, loss and heartbreak in the Second World War, by the author of the Fleethaven Trilogy, Margaret Dickinson.

Rose and Myrtle Sylvester look up to their older sister, Peggy. She is the sensible, reliable one in the household of women headed by their grandmother, Grace Booth, and their mother, Mary Sylvester. When war is declared in 1939 they must face the hardships together and huge changes in their lives are inevitable. For Rose, there is the chance to fulfil her dream of becoming a clippie on Sheffield's trams like Peggy. But for Myrtle, the studious, clever one in the family, war may shatter her ambitions.

When the tram on which Peggy is a conductress is caught in a bomb blast, she bravely helps to rescue her passengers. One of them is a young soldier, Terry Price, and he and Peggy begin courting. They meet every time he can get leave, but eventually Terry is posted abroad and she hears nothing from him. Worse still, Peggy must break the devastating news to her family that she is pregnant.

The shock waves that ripple through the family will affect each and every one of them and life will never be the same again.

Born in Gainsborough, Lincolnshire, Margaret Dickinson moved to the coast at the age of seven and so began her love for the sea and the Lincolnshire landscape. Her ambition to be a writer began early and she had her first novel published at the age of twenty-five. She has since written many popular novels, including Plough the Furrow, Sow the Seed and Reap the Harvest, which make up her Lincolnshire Fleethaven Trilogy.

GOR004538283
The Clippie Girls by Margaret Dickinson
Margaret Dickinson
Used - Very Good
Paperback
Pan Macmillan
2013-02-01
448
0330544314
9780330544313
N/A
Book picture is for illustrative purposes only, actual binding, cover or edition may vary.
This is a used book - there is no escaping the fact it has been read by someone else and it will show signs of wear and previous use. Overall we expect it to be in very good condition, but if you are not entirely satisfied please get in touch with us.