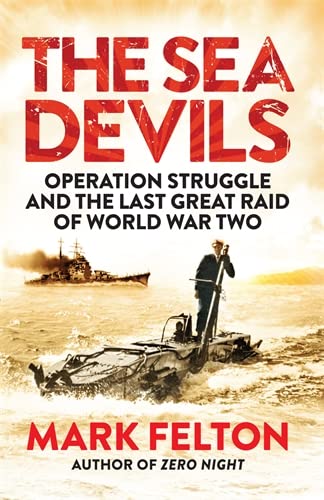 The Sea Devils
by Mark Felton

July 1945. Eighteen young British, Australian and New Zealand special forces from a top-secret underwater warfare unit prepare to undertake three audacious missions against the Japanese.
Using XE-craft midget submarines, the raiders will creep deep behind Japanese lines to sink two huge warships off Singapore and sever two vitally important undersea communications cables. Success will hasten ultimate victory over Japan; but if any of the men are captured they can expect a gruesome execution.
Can the Sea Devils overcome Japanese defences, mechanical failures, oxygen poisoning and submarine disasters to fulfil their missions? Mark Felton tells the true story of a band of young men living on raw courage, nerves and adrenalin as they attempt to pull off what could be the last great raid of World War Two.

'a triumph of human tenacity, and its account here will leave your fingernails significantly shorter' * History of War *
'as gripping as any thriller' * Choice *

MARK FELTON has written over a dozen books on World War Two, including most recently Zero Night, an account of a mass POW escape, described as `a thundering good read' by History of War magazine. His Japan's Gestapo was named `Best Book of 2009' by the Japan Times. He also writes regularly for publications including Military History Monthly and World War II. After a decade spent working in Shanghai, he now lives in Colchester. Visit www.markfelton.co.uk.

GOR006910177
The Sea Devils: Operation Struggle and the Last Great Raid of World War Two by Mark Felton
Mark Felton
Used - Very Good
Paperback
Icon Books Ltd
2015-07-29
334
1848319940
9781848319943
N/A
Book picture is for illustrative purposes only, actual binding, cover or edition may vary.
This is a used book - there is no escaping the fact it has been read by someone else and it will show signs of wear and previous use. Overall we expect it to be in very good condition, but if you are not entirely satisfied please get in touch with us.