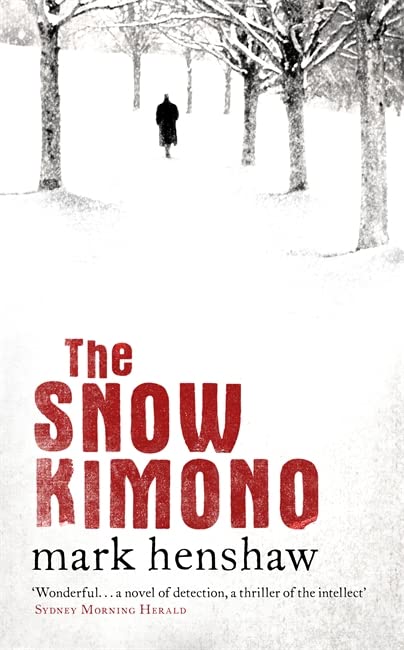 The Snow Kimono
by Mark Henshaw

The Snow Kimono by Mark Henshaw

On the same day that a retired French police inspector receives a letter from a woman claiming to be his daughter, he returns to his apartment to find a stranger waiting for him on his doorstep. That stranger is a Japanese man called Tadashi Omura, and the men end up telling each other their life stories, transporting us back to Japan and Algeria. As we try and work out the connection between the two men, one thing that's clear is that they've both led lives that have been extraordinary, dangerous and built on layers upon layers of lies.

A novel of exquisite beauty, which evades categorisation * The Times *
A striking piece of work, with all the intricate, precise beauty of an origami bird * Lady *
Gripping... each chapter builds on the one before, unfolding through levels of story to unpack deeper and deeper truths * Guardian *
Wonderful...a novel of detection, a thriller of the intellect * Sydney Morning Herald *
Stunning and hypnotic... You won't read another novel like THE SNOW KIMONO this year, or perhaps for many to come * Asian Review of Books *
This book casts a spell from the start....A highly original book full of small sensations with the bonus of being a joy to read * Shots Magazine *
Strongly atmospheric, the vivid scenery of Japan resonates through Henshaw's carefully placed words as he creates a psychological thriller * Scottish Woman *
The novel questions authorship and the slipperiness of memory...[Its] narrative twists are challengingly clever * Australian Book Review *
The writing is beautiful: pellucid and wonderfully visual, painting memorable landscape cameos. The reader is compliant, willingly engaged with a story that starts in medias res and branches in unexpected and seemingly unconnected yet complementary directions * Advertiser *
Masterful...a tale almost as seamless, and of such a rich fabric, as one of Sachiko's mother's famous kimonos * Sydney Review of Books *
Henshaw creates a world of psychological complexity and emotional subtlety in a story that moves from Paris to Japan and back again...Henshaw's prose shimmers as his narrative becomes ever more nuanced, complex, and misleading * Kirkus Reviews *
Henshaw's prose [is] luminous and crisp, like the snowy countryside of Japan or the barren lanes of Algiers...When I finished The Snow Kimono, I raised my head, vaguely surprised that I was at home, in familiar surrounds, and it was still daylight outside. I turned straight back to page one and began again * Saturday Paper *

Mark Henshaw has lived in France, Germany, Yugoslavia and the USA. He currently lives in Canberra where he was for many years curator at the National Gallery of Australia. He is now writing full-time.

GOR007529367
The Snow Kimono by Mark Henshaw
Mark Henshaw
Used - Very Good
Paperback
Headline Publishing Group
2016-02-25
416
1472225708
9781472225702
N/A
Book picture is for illustrative purposes only, actual binding, cover or edition may vary.
This is a used book - there is no escaping the fact it has been read by someone else and it will show signs of wear and previous use. Overall we expect it to be in very good condition, but if you are not entirely satisfied please get in touch with us.