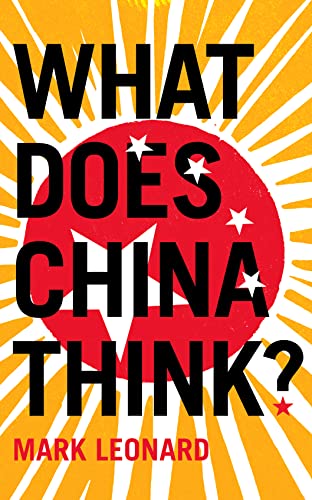 What Does China Think? by Mark Leonard

An invigorating book about the debates raging within China. We all know about the fast pace of change in this country. This book brings us the ideas being fought over in the country itself - from democracy to the idea of a `peaceful rise'. It challenges all of our assumptions about China.

What Does China Think? by Mark Leonard

An invigorating book about the debates raging within China. We all know about the fast pace of change in this country. This book brings us the ideas being fought over in the country itself - from democracy to the idea of a `peaceful rise'. It challenges all of our assumptions about China.

We know everything and nothing about China. We know that China is changing so fast that the maps in Shanghai need to be rewritten every two weeks. We know that China has brought 300 million people from agricultural backwardness into modernity in just 30 years (something that took 200 years in Europe). China's voracious appetite for resources is gobbling up 40% of the world's cement., 40% of its coal, 30% of its steel, and 12% of its energy. It has become so integrated into the global economy that its prospects have immediate effects on our everyday lives: simultaneously doubling the cost of the London Olympics while halving the cost of our computers; keeping the US economy afloat but sinking the Italian footwear industry. We have an image of China as a dictatorship; a nationalist empire that threatens its neighbours and global peace.

But how many people know about the debates raging within China? What do we really know about the kind of society China wants to become? What ideas are motivating its citizens? We can name America's Neo-Cons and the religious right, but cannot name Chinese writers, thinkers or journalists - what is the future they dream of for their country, or the world it is shaping? Because China's rise - like the fall of Rome or the British Raj - will echo down generations to come, these are the questions we increasingly need to ask. Mark Leonard asks us to forget everything we thought we knew about China and start again. He introduces us to the thinkers that are shaping China's wide open future and opens up a hidden world of intellectual debate that is driving a new Chinese revolution and changing the face of the world.

'Mark Leonard's detailed and investigative study on the Chinese psyche. A fascinating read and well worth a drop in if you've got an interest in the People's Republic.' YQ Magazine

`This is a brilliant, entertaining, penetrating, and thought-provoking look at what may be the great question of the 21st century: How will China's rise shape our world?' Robert Kagan

`A masterful and highly readable report on the original thinking that is emerging in China on the subject of globalization and China's role in the world. It should be read by everyone who wants to understand the intellectual challenge posed by China's rise.' George Soros

`The premise of What Does China Think? is that for all the economic, political, and military focus on China, we have not paid nearly enough to Chinese ideas, to the rapidly increasing intellectual capital that will be as much a source of China's power and influence in the world as its economic capital. Mark Leonard is one of the best young thinkers in Western foreign policy circles; the results of his explorations to the east are consistently surprising and always enlightening. Anyone who thinks about China will want to know what China thinks.' Anne-Marie Slaughter

`Mark Leonard gives us a fascinating insight into how Chinese intellectuals and policy-making elites see the world which they will certainly help to shape during the coming century.' Chris Patten

Mark Leonard founded the leading independent think tank The Foreign Policy Centre at the age of 24, under the patronage of the British Prime Minister Tony Blair. He also wrote the famous pamphlet, Rebranding Britain, coining the phrase `Cool Britannia'. He is now Director of Foreign Policy at the Centre for European Reform. He has written regular commentary for all the leading newspapers and magazines, has presented the BBC' Analysis programme, and appeared as a commentator on CNN.

GOR001536630
9780007230686
0007230680
What Does China Think? by Mark Leonard
Mark Leonard
Used - Very Good
Paperback
HarperCollins Publishers
2008-02-18
224
N/A
Book picture is for illustrative purposes only, actual binding, cover or edition may vary.
This is a used book - there is no escaping the fact it has been read by someone else and it will show signs of wear and previous use. Overall we expect it to be in very good condition, but if you are not entirely satisfied please get in touch with us
Trustpilot