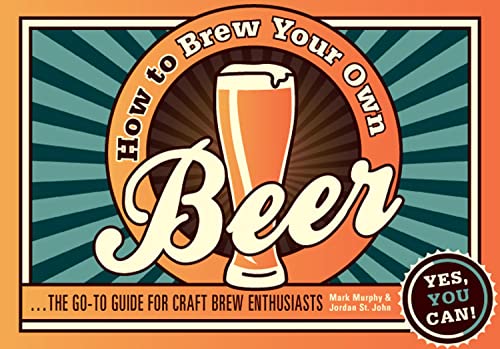 How to Brew Your Own Beer
by Mark Murphy

Both a fascinating guide to different types of beer and a fail-safe home brewer's recipe book, How to Brew Your Own Beer is perfect for beer lovers of all levels, from novices to experienced home brewers who want to try a new style.

How to Brew Your Own Beer Summary

How to Brew Your Own Beer: The go-to guide for craft brew enthusiasts by Mark Murphy

Ever wondered whether you could make a beer just like your favourite brew from the bar? With this book the answer is - "Yes, you can!" . . . and in just under two weeks, from start to first sip! Brewing your own beer at home means not only that you get to brew to your own taste, strength and colour desires, but you can also explore and create to an almost infinite level. Brewing your own beer will be fun and it will save you money.

Many people think that home brewing is complicated and messy - but this book shows you that neither need be the case. Expert authors Mark Murphy and Jordan St. John, aided by consultants Jon Downing (who has helped set up over 100 brewpub startups) and Graham Lees (co-founder of the British real-ale campaigning organisations, CAMRA), take the reader through every stage of the brewing process, starting with which hop (or hops) to use, and concluding with instructions for bottling your finished project.

How to Brew Your Own Beer is both a detailed description of different types of beer and a fail-safe home brewer's recipe book. With step-by-step instructions and some 200 supporting colour illustrations, the book is perfect for beer lovers of all levels - novices and home brewers who want to try a new style.

Customer Reviews - How to Brew Your Own Beer

Mark Murphy was an accountant and amateur homebrewer before he took his hobby to the next level by pursuing a professional brewing education. Jordan St. John is a Canadian beer writer, blogger and brewer, his articles appearing in many publications, including the Toronto Sun and newspapers in Calgary, Edmonton, Ottawa and Winnipeg. He lives and works in Toronto.

GOR005360343
How to Brew Your Own Beer: The go-to guide for craft brew enthusiasts by Mark Murphy
Mark Murphy
Used - Very Good
Paperback
Pavilion Books
2013-09-05
128
1909396249
9781909396241
N/A
Book picture is for illustrative purposes only, actual binding, cover or edition may vary.
This is a used book - there is no escaping the fact it has been read by someone else and it will show signs of wear and previous use. Overall we expect it to be in very good condition, but if you are not entirely satisfied please get in touch with us.