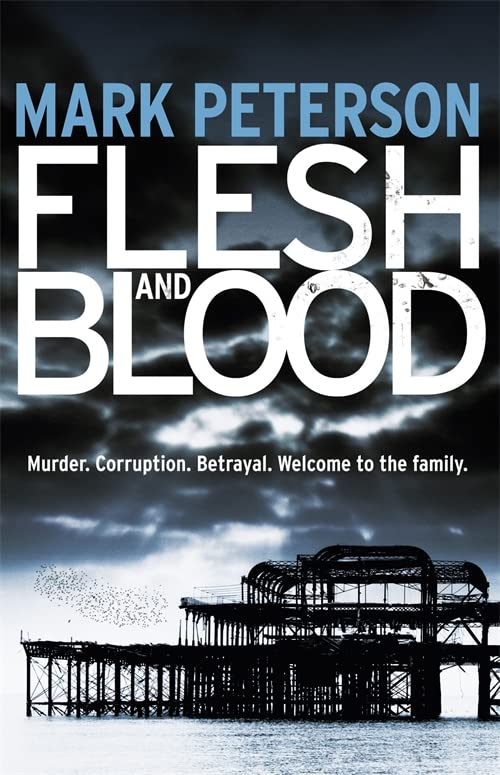 Flesh and Blood by Mark Peterson

A psychopath intent on annihilating anyone in his way. A young detective with a troubled past. An investigation on the verge of collapse.

Flesh and Blood by Mark Peterson

A psychopath intent on annihilating anyone in his way. A young detective with a troubled past. An investigation on the verge of collapse.

When an undercover police officer is killed and a deadly shipment of pure heroin hits land, it looks as though the operation to bring down Brighton's biggest drug dealer is compromised. But the investigation is in more trouble than either Detective Sergeant Minter or his boss, Tom Beckett, could ever imagine.

Embarking on a bloody journey that will set him on a collision course with his team, Minter is pulled back into his own troubled past - to a childhood spent in care and the vicious murder of his closest friend. Past and present converge and Minter finds himself pitted against the only family he has ever known - the police family - as he fights to uncover the startling truth.

FLESH AND BLOOD is the first novel in a stunning new crime series starring DS Minter. By turns gripping, shocking and poignant, it will keep you riveted to the last page.

Fans of Peter James will feel right at home with this gritty, dark and unflinchingly tough crime story set in Brighton... A tight andtense thriller. * PETERBOROUGH TELEGRAPH *
Peterson's protagonist is likeable and his depiction of a drug turf war in Brighton is gritty and believable * BIG ISSUE IN THE NORTH *
A fast-paced read which takes us on a journey through Brighton's underworld, where violence is commonplace, to a dramatic conclusion * TELEGRAPH & ARGUS *

Mark Peterson was born in London and studied Literature at the University of Essex. Mark then worked in PR before choosing to re-train as a teacher.

He returned to university in 2006 to begin an MA in Creative Writing. It was there that he started to write the novel that would become Flesh and Blood, the first in the Minter series.

He now lives in Brighton with his wife and two children.

GOR005606056
9781409135920
1409135926
Flesh and Blood by Mark Peterson
Mark Peterson
Used - Good
Paperback
Orion Publishing Co
2013-03-14
352
N/A
Book picture is for illustrative purposes only, actual binding, cover or edition may vary.
This is a used book - there is no escaping the fact it has been read by someone else and it will show signs of wear and previous use. Overall we expect it to be in very good condition, but if you are not entirely satisfied please get in touch with us
Trustpilot