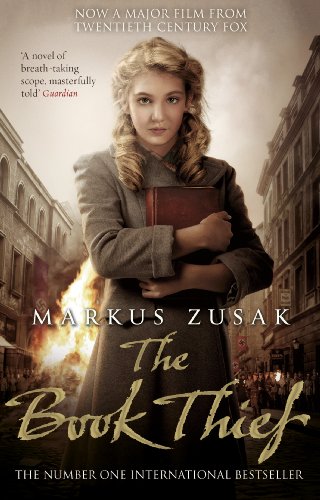 The Book Thief
by Markus Zusak

In Stock
$13.49
inc. GST
Liesel, a nine-year-old girl, is living with a foster family on Himmel Street. Her parents have been taken away to a concentration camp. This title tells her story and the story of the inhabitants of her street when the bombs begin to fall.
Like New Very Good Good Well Read
Only 1 left

BRIDGE OF CLAY, the new novel by Markus Zusak, is out this October 2018 in hardback.

HERE IS A SMALL FACT - YOU ARE GOING TO DIE

1939. Nazi Germany. The country is holding its breath. Death has never been busier.
Liesel, a nine-year-old girl, is living with a foster family on Himmel Street. Her parents have been taken away to a concentration camp. Liesel steals books. This is her story and the story of the inhabitants of her street when the bombs begin to fall.

SOME IMPORTANT INFORMATION - THIS NOVEL IS NARRATED BY DEATH

BRIDGE OF CLAY, the new novel by Markus Zusak, is out this October 2018 in hardback.

Extraordinary, resonant and relevant, beautiful and angry. * Sunday Telegraph *
...a beautifully balanced piece of storytelling...Unsettling, thought-provoking, life affirming, triumphant and tragic, this is a novel of breathtaking scope, masterfully told. It is an important piece of work, but also a wonderful page-turner. * Guardian *
A moving work which will make many eyes brim. * Independent on Sunday *
This is a weighty novel worthy of universal acclaim. A sense of dread prevades this beautifully written novel. As The Book Thief draws to a close, Death says: "There's a multitude of stories that i allow to distract me as I work." The story of the Book Thief, who tried to change the world in her own small way, proves one formidable and inspiring distraction. * The Daily Express *
Brilliant and hugely ambitious ... the kind of book that could be life-changing * New York Times Book Review *

MARKUS ZUSAK is the bestselling author of six novels, including THE BOOK THIEF. His books have been translated into more than forty languages, to both popular and critical acclaim. He lives in Sydney with his wife and two children.
Find Markus on his blog www.zusakbooks.com
Facebook /markuszusak
Instagram @markuszusak

GOR009316280
The Book Thief: Film tie-in by Markus Zusak
Markus Zusak
Used - Like New
Paperback
Transworld Publishers Ltd
2014-01-30
560
0552779733
9780552779739
N/A
Book picture is for illustrative purposes only, actual binding, cover or edition may vary.
This is a used book - there is no escaping the fact it has been read by someone else and it will show signs of wear and previous use. Overall we expect it to be in very good condition, but if you are not entirely satisfied please get in touch with us.