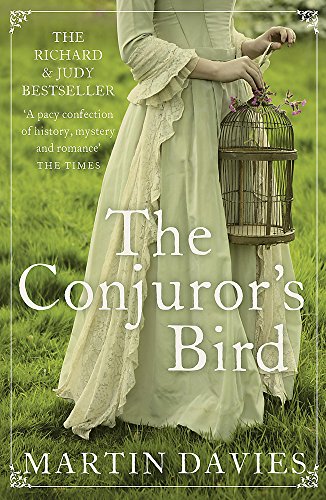 The Conjuror's Bird
by Martin Davies

The Conjuror's Bird by Martin Davies

It seems a long time ago that Fitz and Gabby were together, with his work on extinct species about to make him world-famous. Now, it's his career that is almost extinct.

Suddenly, though, the beautiful Gabby reappears in his life. She wants his help in tracing the history of The Mysterious Bird of Ulieta, a creature once owned by the great 18th Century naturalist Joseph Banks.

It soon becomes clear that Fitz is getting involved in something more complicated - and dangerous - than the search for a stuffed bird.

To solve the puzzle, he must uncover the identity of the amazing woman Banks loved - a woman who has disappeared from history as effectively as the specimen he is hunting.

THE CONJUROR'S BIRD is the perfect mixture of detection, romance and history.

A highly readable page-turner * Guardian *
THE CONJUROR'S BIRD is a rare treat of a book; a romance, thriller and historical novel all in one - and perfectly formed. * Lucy Hale, Hodder Sales Director *
'An exciting and absorbing debut novel...' * Sue Baker, Publishing News *
'A pacy confection of history, mystery and romance... a most engaging and unusual novel' * The Times *
An enjoyable tale of love, loss and taxidermy . . . a cracking holiday read. * Observer *
'Enjoyable, gently told yarn...' * The Bookseller *
A pacy confection of history, mystery and romance...Davies interweaves his complex narrative with energy and authority...a most engaging and unusual first novel. * The Times *
'Two gripping, intercut narratives... a lyricism that captures the joy of the natural world... a highly successful and informative entertainment' * Independent *
An absorbing historical detective story . . . a beautifully evoked narrative from the past * Guardian *
'This book I loved on so many levels...the excitement of a great mystery...a truly fantastic book.' * Manly Daily (Sydney, Australia) *
'A poignancy that will aptly linger with you after you've turned the final page' * Lincolnshire Echo *
Ambitious and intriguing... part thriller, part love story, part quest, this is a hugely readable book. * Spectator *
'Ideal for book clubs, ideal too for any lover of commercial literary fiction. An exciting and absorbing debut novel from Davies.' * Publishing News *
'Intriguing and cleverly constructed' * Choice *
'Ambitious and intriguing... part thriller, part love story, part quest, this is a hugely readable book whose concerns linger in the mind... Davies' novel hints, unobtrusively but effectively, at many of the issues underlying man's urge to collect ornithological specimens, and also the uneasy relationship between science, business and the natural world.' * Andrew Taylor, Spectator *
'Poignant and beguiling... like all the best novels, it left me with a sense of having learned something.' * Andrew Taylor, author of The American Boy *
"[A] gripping book of literary suspense. . . . Davies indulges in clever speculation about the bird's whereabouts and adds an appealing strain of romance surrounding the identity of Banks's mistress. . . . A captivating novel." * Publishers Weekly (starred review) *
The book flits easily back and forth between the past and the present and I found it not only a page-turner but one where the turning accelerated as the story went along * Lincolnshire Echo *
'Goddard-esque, drawing several mysteries and periods together in a fascinating tale' * Bookseller *
"Suspenseful, intriguing, and romantic, this is great entertainment and an excellent choice for book discussion groups; highly recommended." * Library Journal (starred review) *
"A gripping blend of history and conjecture, romance and detection...it consists of two parallel stories wrapped around the race to unravel one of natural history's most enduring puzzles. [An] elegantly crafted journey into the nature of loss and love, memory and history." * Canberra Times *
"This book I loved on so many levels. Firstly for a greater understanding of the life of Sir Joseph Banks...then for the excitement of a great mystery... A truly fantastic book full of three centuries of secrets and surprises." * Manly Daily *
This book haunts me: I was moved, intrigued and entertained and, with each page turned, I wanted, very much, to know what was going to happen. Economically and beautifully drawn, the enigmatic delicacy of the characters and the way the stories of the past and the present intersect so teasingly, so elegantly, makes THE CONJUROR'S BIRD a deeply satisfying novel. And, best of all, the layers of the story take one deeper and deeper into the worlds of the past and the present until, in the end, there seems nothing more to discover in the lives of these characters; yet I wanted more. I heartily recommend this book! * Posie Graeme-Evans, author of THE INNOCENT and THE *
An entertaining read * New Books Magazine *

Martin Davies grew up in North West England. All his writing is done in cafes, on buses or on tube trains, and an aversion to laptops means that he always works in longhand. He has travelled widely, including in the Middle East and India, and substantial parts of THE UNICORN ROAD were written while travelling through Sicily. He works as a consultant in the broadcasting industry.

GOR000359518
The Conjuror's Bird by Martin Davies
Martin Davies
Used - Very Good
Paperback
Hodder & Stoughton General Division
2006-08-10
320
0340896183
9780340896181
Short-listed for British Book Awards: Best Read of the Year 2006
Book picture is for illustrative purposes only, actual binding, cover or edition may vary.
This is a used book - there is no escaping the fact it has been read by someone else and it will show signs of wear and previous use. Overall we expect it to be in very good condition, but if you are not entirely satisfied please get in touch with us.