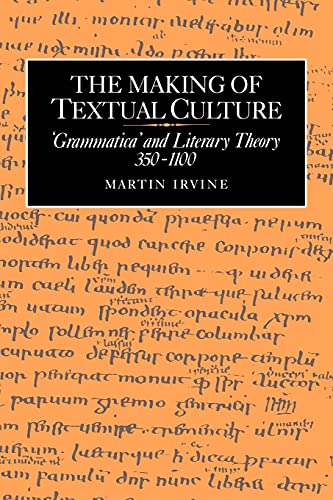 The Making of Textual Culture
by Martin Irvine

Used Price
$78.99
inc. GST
Free Shipping in Australia
This is a major study of the cultural and social effects of grammatica, the main medieval discipline concerned with literacy, language and literature. Drawing on a variety of sources, Irvine reveals the implications of grammatica for literary theory and the making of textual culture in the medieval West.
Reviews:
Trustpilot
Very Good

The Making of Textual Culture Summary

The Making of Textual Culture: 'Grammatica' and Literary Theory 350-1100 by Martin Irvine

This is the a major study of the cultural work performed by grammatica, the central discipline concerned with literacy, language, interpretation and literature in medieval society. Grammatica was, with all aspects of Latin literary text, its language, meaning and value. Martin Irvine demonstrates that grammatica, though the first of the liberal arts, was not simply one discipline among many: it had an essentially constitutive function, defining language, meaning and texts for other medieval disciplines. Martin Irvine draws together several aspects of medieval culture - literary theory, the nature of literacy, education, biblical interpretation, the literary canon and linguistic thought - in order to disclose the more far-reaching social effect of grammatica, chief of which was the making of textual culture in the medieval West.

The Making of Textual Culture Reviews

"The book is hugely comprehensive, drawing on a wide bibliography and some materials available only in manuscript. It is a very useful reference work." Nicolette Zeeman, Studies in the Age of Chaucer
"His excellent study of this authorized method of reading does for the early Middle Ages what the work of scholars such as Judson Allen, Rita Copeland, Douglas Kelly, Alastair Minnis, and Marjorie Curry Woods has done for the later Middle Ages....It is essential reading for anyonne who seeks to understand the otherness of medieval litertaure." Martin Camargo, Modern Philology
"This is an excellent book, a very important book which should be read or at least consulted by all students of the Middle Ages..." Manuscripta

List of illustrations; Prefece; Acknowledgements; Abbreviations; Grammatica: a historical and methodological introduction; 1. The formation of grammatica within classical discursive practices; 2. The developing model of grammatica in the Roman and early medieval world; 3. Linguistic foundations; 4. Enarratio I: commentaries on Vergil from Donatus to Fulgentius; 5. Grammatica and the formation of medieval textual communities: Alexandria to Isidore of Seville; 6. Enarratio II: interpretation and the grammar of allegory; 7. Grammatica and textual culture in Anglo-Saxon England and Carolingian Europe; 8. The genres of grammatical culture and manuscript textuality; 9. The implications of grammatical culture in Anglo-Saxon England; 10. Conclusion; Notes; Bibliography; Indexes.

GOR010800512
The Making of Textual Culture: 'Grammatica' and Literary Theory 350-1100 by Martin Irvine
Martin Irvine
Cambridge Studies in Medieval Literature
Used - Very Good
Paperback
Cambridge University Press
2006-11-02
628
0521031990
9780521031998
N/A
Book picture is for illustrative purposes only, actual binding, cover or edition may vary.
This is a used book - there is no escaping the fact it has been read by someone else and it will show signs of wear and previous use. Overall we expect it to be in very good condition, but if you are not entirely satisfied please get in touch with us.