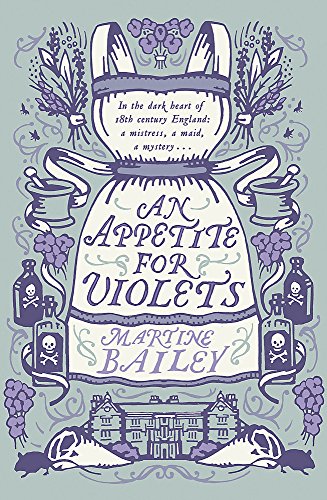 An Appetite for Violets
by Martine Bailey

An Appetite for Violets Summary

An Appetite for Violets by Martine Bailey

That's how it is for us servants. No one pays you much heed; mostly you're invisible as furniture. Yet you overhear a conversation here, and add a little gossip there. A writing desk lies open and you cannot help but read a paper. Then you find something, something you should not have found.

Irrepressible Biddy Leigh, under-cook at the foreboding Mawton Hall, only wants to marry her childhood sweetheart and set up her own tavern. But when her elderly master marries the young Lady Carinna, Biddy is unwittingly swept up in a world of scheming, secrets and lies.

Forced to accompany her new mistress to Italy, Biddy takes with her an old household book of recipes, The Cook's Jewel, in which she records her observations. When she finds herself embroiled in a murderous conspiracy, Biddy realises that the secrets she holds could be the key to her survival - or her downfall . . .

An Appetite for Violets Reviews

Inspired by eighteenth-century household books of recipes, writing historical fiction has allowed Martine to indulge in her obsessions with food, history and travel.

As an amateur cook, Martine won the Merchant Gourmet Recipe Challenge and was a former UK Dessert Champion, cooking at Le Meurice in Paris. In pursuit of authenticity she has studied with food historian Ivan Day and experienced Georgian food and fashion at first-hand with an historic re-enactment society.

Martine lives in Cheshire, England and Auckland, New Zealand. She is married with one son and is currently writing a second historical novel.

GOR005756703
An Appetite for Violets by Martine Bailey
Martine Bailey
Used - Very Good
Paperback
Hodder & Stoughton
2014-05-22
400
1444768727
9781444768725
N/A
Book picture is for illustrative purposes only, actual binding, cover or edition may vary.
This is a used book - there is no escaping the fact it has been read by someone else and it will show signs of wear and previous use. Overall we expect it to be in very good condition, but if you are not entirely satisfied please get in touch with us.