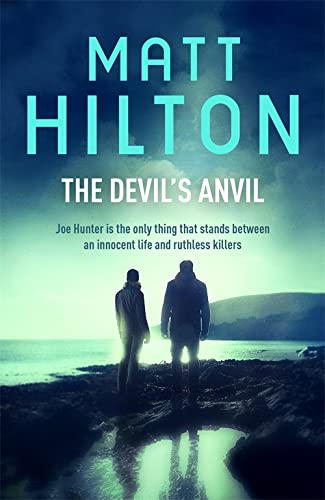 The Devil's Anvil
by Matt Hilton

The Devil's Anvil by Matt Hilton

Accepting the task of protecting Billie Womack is a no-brainer for ex-counterterrorist soldier Joe Hunter, but it comes with its own set of complications.

Billie's husband, Richard, stole thirty million dollars from some violent people. He apparently died in a car crash with Billie's daughter, Nicola, during a desperate attempt to elude his pursuers. But his enemies don't believe him dead. They think he escaped the plunge into the icy river that killed Nicola and has now decided to come back for the money. If he's alive, they believe he'll contact Billie.

It doesn't take long for the bad guys to arrive at her remote farmhouse. Soon she and Joe are fugitives. Dead or alive, Richard's fate means nothing to Hunter, but he promises to do everything in his power to protect the grieving mother. Even if it means taking a bullet for her, it's a price he'll pay.

It's a pledge he will come to regret, as he learns that killers are forged on the Devil's anvil.

The pace rattles along with the intensity of a disgruntled rattlesnake . . . A fantastic tale of "derring do" . . . The prose is Lycra tight and there is more atmosphere than previous novels. The Arizona desert is so well drawn it almost becomes a character itself. * www.crimesquad.com *
Sharp and hard hitting . . . Matt doesn't allow himself to get complacent, but continually delves deeper into the psyche of Joe . . . Fast-paced, action-filled and completely addictive, Matt shows his continuing maturity as a writer with an exhilarating ride that still maintains humour and wit. * www.shotsmag.co.uk *
A thrill-a-thon book that packs in more action than all three hit Bourne films rolled into one. This is Hilton's fifth Hunter adventure and he's motoring so fast he's coming up on the tail of Lee Child and stellar creation Jack Reacher. . . It's a wham, bam, bone-crunching treat! * Alex Gordon, Peterborough Evening Telegraph *

Matt Hilton worked for twenty-two years in private security and the police force in Cumbria. He is a 4th Dan blackbelt and coach in Ju-Jitsu. He lives in Cumbria with his wife Denise. He keeps a website at www.matthiltonbooks.com and can be found on Facebook and on twitter.com/matthilton