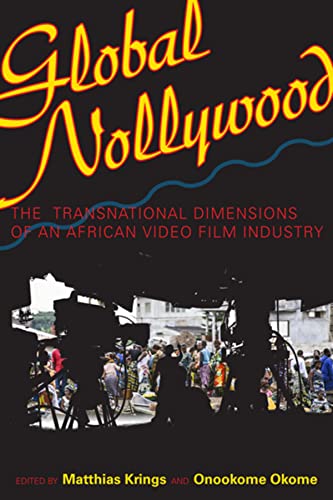 Global Nollywood considers this first truly African cinema beyond its Nigerian origins. In 15 lively essays, this volume traces the engagement of the Nigerian video film industry with the African continent and the rest of the world. Topics such as Nollywood as a theoretical construct, the development of a new, critical film language, and Nollywood's transformation outside of Nigeria reveal the broader implications of this film form as it travels and develops. Highlighting controversies surrounding commodification, globalization, and the development of the film industry on a wider scale, this volume gives sustained attention to Nollywood as a uniquely African cultural production.

This is a wonderful collection, bringing together a bounty of new information, descriptions and ideas. . . . Overall, the book brings together a set of highly original contributions that advance knowl- edge of Nigerian video production.

[T]he cumulative effect of [these] studies is to provide invaluable information for those wishing to keep up with where African cinema is today.

Global Nollywood represents the most up-to-date research on Nollywood as a transnational cultural practice and is a must-read for scholars and students of African screen media.

[T]he book is ground-breaking in its exploration of unchartered territories. . . . It proves that, in spite of appearing to be a niche market, Nollywood, which has reconfigured the canonized theory of African cinema and inspired other African countries, can no longer be excluded from the canon of African cinema in the field of film studies.

The book compiles a range of pieces of high-quality academic work, dealing with Nollywood's transnational production, its uptake in different places in the world, and the various needs it serves of its many different audience groups in Africa and the diaspora. It also unveils a fascinating variety of the ways in which Nollywood cinema is viewed and interpreted, culturally remediated in new contexts, and its stories reproduced with a twist to cater to religious and cultural sensitivities.

Krings and Okome have successfully produced a volume that is simultaneously delightfully entertaining yet appropriately erudite. It is a welcome addition to the fields of film, media, African, and cultural studies. The volume is extremely accessible to both the general informed public and academic audiences and, as a research tool, can be quickly or conveniently accessed for specific information.Winter 2015

Kring's and Okome's edited volume represents a new and important stage in an ongoing conversation about Nollywood's transnational dimensions. . . This volume is highly recommended reading . . . .

Onookome Okome is Professor of African Literature and Film Studies at the University of Alberta, in Edmonton, Canada.

GOR008224812
Global Nollywood: The Transnational Dimensions of an African Video Film Industry by Matthias Krings
Matthias Krings
African Expressive Cultures
Used - Very Good
Paperback
Indiana University Press
2013-05-27
382
0253009359
9780253009357
N/A
Book picture is for illustrative purposes only, actual binding, cover or edition may vary.
This is a used book - there is no escaping the fact it has been read by someone else and it will show signs of wear and previous use. Overall we expect it to be in very good condition, but if you are not entirely satisfied please get in touch with us.