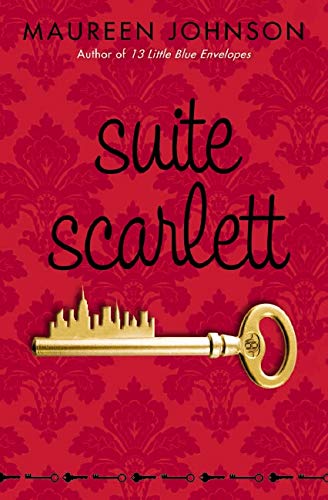 Scarlett Martin's eccentric family runs a New York City hotel that dates from the 1920s. After Scarlett turns 15, she is given charge of the Empire Suite, occupied by an aging starlet who is writing her memoir. Soon, Scarlett becomes caught up in the woman's adventures.

Scarlett Martin has grown up in a most unusual way. Her family owns the Hopewell, a small Art Deco hotel in the heart of New York City.

When each of the Martins turns fifteen, they are expected to take over the care of a suite. For Scarlett's fifteenth birthday, she gets both a room called the Empire Suite, and a permanent guest called Mrs. Amberson. Scarlett doesn't quite know what to make of this C-list starlet and world traveler. An dwhen she meets Eric, an astonishingly gorgeous actor who has just moved to the city, her summer takes a second unexpected turn.

Before the summer is over, Scarlett will have to survive a whirlwind of thievery and romantic missteps. But in the city where anything can happen, she might just be able to pull it off.

Maureen Johnson is the author of SUITE SCARLETT, SCARLETT FEVER, THE KEY TO THE GOLDEN FIREBIRD, 13 LITTLE BLUE ENVELOPES, THE BERMUDEZ TRIANGLE, DEVILISH, and GIRL AT SEA. She lives in New York City.
GOR003357937
Suite Scarlett by Maureen Johnson
Maureen Johnson
Used - Very Good
Paperback
Unknown
0
0545096324
9780545096324
N/A
Book picture is for illustrative purposes only, actual binding, cover or edition may vary.
This is a used book - there is no escaping the fact it has been read by someone else and it will show signs of wear and previous use. Overall we expect it to be in very good condition, but if you are not entirely satisfied please get in touch with us
Trustpilot