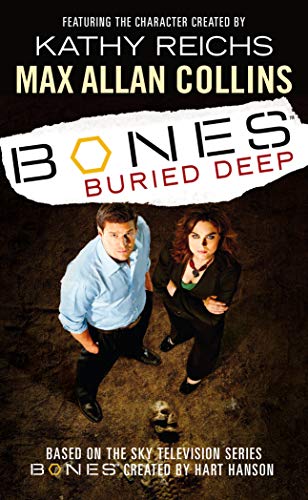 In Stock
$30.99
inc. GST
Dr. Temperance Brennan, a highly skilled forensic anthropologist who works at the Jeffersonian Institution and writes novels as a sideline, has an uncanny ability to read clues left behind in a victim's bones.
Very Good
10 in stock

Dr. Temperance Brennan, a highly skilled forensic anthropologist who works at the Jeffersonian Institution and writes novels as a sideline, has an uncanny ability to read clues left behind in a victim's bones. Law enforcement calls upon her to assist with murder investigations when the standard methods of identifying a body are useless. Brennan often finds herself partnered with special investigator Seely Booth of the FBI's Homicide Investigation Unit. Booth, a former Army sniper who mistrusts science and scientists, believes the key to solving crimes lies in discovering the truth from good old-fashioned detective work. Brennan's equally brilliant colleagues at the Jeffersonian's Medico-Legal Lab include earthy and bawdy Angela Montenegro, who's created a unique way to render an original crime scene in a 3-D computer image; Brennan's assistant, Zack Addy, a young prodigy whose genius IQ actually gets in the way of finishing any of the several doctorates he's begun; "the bug guy" Dr. Jack Hodgins, who's an expert on insects, spores and minerals, but conspiracy is his hobby; and Brennan's boss, the imposing lab director Dr. Daniel Goodman. "We hope my readers will realize that it's another manifestation of Tempe, and that they are in on this inside joke" says the real Reichs

"'Let other crime shows compete for your attention by growing ever more sick, gory and graphic. Bones is built on a more traditional and solid foundation: the strength of its characters...the season's most appealing new crime fighters'" * USA Today *
"'I've been yearning for a forensic anthropologist to turn up for some time now, preferably one who combines a feisty sexuality with a prickly reticence, and a brain of forbidding power with a cuddly proficiency in martial arts and sharpshooting. Bones answered all these prayers, by unleashing the mighty force that is Temperance Brennan'" -- Pete Clark * Evening Standard *
"'smouldering performances make Bones a crime series you can really get your teeth into... assured and amusing'" -- Stephen Armstrong * Sunday Times *
"'This is good, lively, perhaps too fast-moving fun and has some excellent lines'" * Financial Times *

Kathy Reichs is forensic anthropologist for the Offices of the Chief Medical Examiner, State of North Carolina, and for the Laboratorie de Sciences Judiciaires et de Medecine Legale for the province of Quebec. A professor of anthropology at the University of North Carolina at Charlotte, she divides her time between Charlotte and Montreal and is a frequent expert witness in criminal trials.

GOR000413533
Bones: TV Tie-in by Max Allan Collins
Max Allan Collins
Used - Very Good
Paperback
Cornerstone
2006-01-19
320
0099498677
9780099498674
N/A
Book picture is for illustrative purposes only, actual binding, cover or edition may vary.
This is a used book - there is no escaping the fact it has been read by someone else and it will show signs of wear and previous use. Overall we expect it to be in very good condition, but if you are not entirely satisfied please get in touch with us.