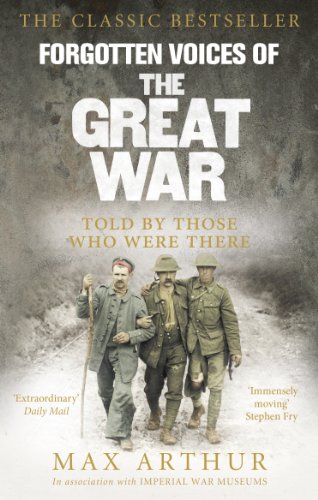 Forgotten Voices Of The Great War
by Max Arthur

In Stock
12,99 $
inc. GST
A team of academics, archivists and volunteers set about tracing First World War veterans and interviewing them in order to record the experiences of ordinary individuals in war.
Like New Very Good Good
Only 1 left

Forgotten Voices Of The Great War by Max Arthur

This unique landmark oral history uses first-hand accounts from ordinary men and women who were there. Gripping, poignant, surprising and even humorous, the personal experiences of these soldiers, civilians, marines and medics from both sides tell us what it was really like to live through what was supposed to be the war to end all wars. Skilfully assembled by acclaimed author and historian Max Arthur using the IWM's remarkable sound archive, Forgotten Voices of the Great War became an instant classic on first publication with close to half a million copies sold. In 1972, the Imperial War Museum began a momentous and important task. A team of academics, archivists and volunteers set about tracing First World War veterans and interviewing them in order to record the experiences of ordinary individuals in war. Since then the Sound Archive has grown to become the largest and most important oral history collections in the world. It now contains over 34,000 recordings, including interviews with veterans of both world wars - both service personnel and non-combatants - recordings relating to Britain and the Empire in the inter-war period 1919-1939, conflicts since 1945 and the Holocaust. In 2002, Ebury Press published the first edition of Forgotten Voices of the Great War. It was both the first time many of these recordings had been transcribed and published, and the only comprehensive oral history of the First World War. Twelve further books covering aspects of the Second World War, the Falklands and the Victoria Cross followed, selling well over a million copies to date.

"An extraordinary and immensely moving book" -- Stephen Fry
"This extraordinary book is crammed with details, conjuring up the atmosphere of war as vividly as the frequent descriptions of appalling violence" * Daily Telegraph *
"The words of the soldiers are as fresh as if they were written yesterday ... extraordinary" * Mail on Sunday *
"These stories are so harrowing, and their witness so precise and devastating" * The Times *
"The stories of these now long-dead vets simply jump off the page" * FHM *

Acclaimed author Max Arthur specialises in first hand recollections of historical events. Previous titles include The Manchester United Air Crash; Above All Courage; Northern Ireland Soldiers Talking; Men of the Red Beret;, There Shall Be Wings: The RAF 1918 to the Present; The True Glory: The Royal Navy 1914 to Present.

GOR008044402
Forgotten Voices Of The Great War by Max Arthur
Max Arthur
Used - Like New
Paperback
Ebury Publishing
2003-10-02
336
0091888875
9780091888879
N/A
Book picture is for illustrative purposes only, actual binding, cover or edition may vary.
This is a used book - there is no escaping the fact it has been read by someone else and it will show signs of wear and previous use. Overall we expect it to be in very good condition, but if you are not entirely satisfied please get in touch with us.