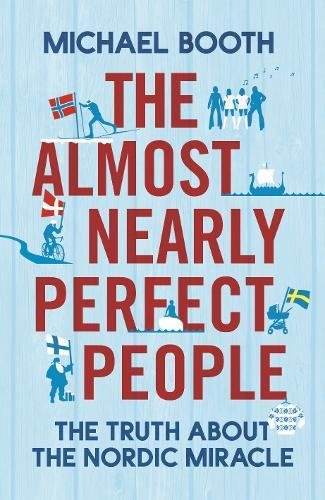 Used Price
$22.49
inc. GST
Free Shipping in Australia
As heard on Book of the Week, Radio 4The whole world wants to learn the secrets of Nordic exceptionalism: why are the Danes the happiest people in the world, despite having the highest taxes?
Like New Very Good Good

The Almost Nearly Perfect People: Behind the Myth of the Scandinavian Utopia by Michael Booth

As heard on Book of the Week, Radio 4 The whole world wants to learn the secrets of Nordic exceptionalism: why are the Danes the happiest people in the world, despite having the highest taxes? If the Finns really have the best education system, how come they still think all Swedish men are gay? Are the Icelanders really feral? How are the Norwegians spending their fantastical oil wealth? And why do all of them hate the Swedes? Michael Booth has lived among the Scandinavians, on and off, for over ten years, perplexed by their many strange paradoxes and character traits and equally bemused by the unquestioning enthusiasm for all things Nordic that has engulfed the rest of the world, whether it be for their food, television, social systems or chunky knitwear. In this timely book he leaves his adopted home of Denmark and embarks on a journey through all five of the Nordic countries to discover who these curious tribes are, the secrets of their success and, most intriguing of all, what they think of each other. Along the way a more nuanced, often darker picture emerges of a region plagued by taboos, characterised by suffocating parochialism and populated by extremists of various shades. They may very well be almost nearly perfect, but it isn't easy being Scandinavian.

"Comprehensive and occasionally downright hilarious... I was laughing out loud" -- Mariella Frostrup * Observer *
"An affectionate and informative study of a region." -- Ian Critchley * Sunday Times *
"[An] entertaining, warts-and-all, English expat look at the Nordic miracle." * Daily Telegraph *
"A thoroughly entertaining read, written brilliantly" -- Bernard Porter * Literary Review *
"A welcome rejoinder to those who cling to the idea of the Nordic region as a promised land...the substance, more often than not, is spot on." * Financial Times *

Michael Booth is the author of five books, including the international bestseller, The Almost Nearly Perfect People, winner of the British Guild of Travel Writers award for Book of the Year, and Sushi and Beyond, which won the Guild of Food Writers award

GOR010462122
The Almost Nearly Perfect People: Behind the Myth of the Scandinavian Utopia by Michael Booth
Michael Booth
Used - Like New
Paperback
Vintage Publishing
2014-02-03
416
0224089625
9780224089623
N/A
Book picture is for illustrative purposes only, actual binding, cover or edition may vary.
The book has been read, but looks new. The book cover has no visible wear, and the dust jacket is included if applicable. No missing or damaged pages, no tears, possible very minimal creasing, no underlining or highlighting of text, and no writing in the margins.