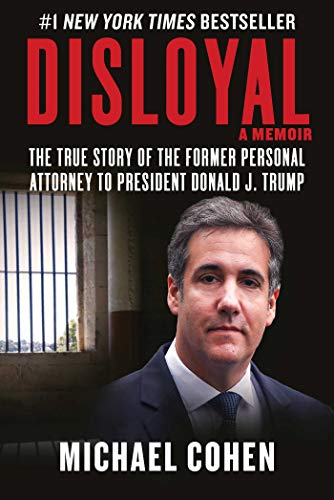 Disloyal: A Memoir by Michael Cohen

Disloyal: A Memoir: The True Story of the Former Personal Attorney to President Donald J. Trump by Michael Cohen

"I read it cover-to-cover. I did not intend to, but I started at the beginning and didn't put it down until it was over."-Rachel Maddow, MSNBC

This book almost didn't see the light of day as government officials tried to bar its publication.
The Inside Story of the Real President Trump, by His Former Attorney and Personal Advisor-The Man Who Helped Get Him Into the Oval Office

This is the most devastating business and political horror story of the century. As Trump's lawyer and "fixer," Cohen not only witnessed firsthand but was also an active participant in the inner workings of Trump's business empire, political campaign, and presidential administration.

This is a story that you have not read in newspapers, or on social media, or watched on television. These are accounts that only someone who worked for Trump around the clock for over a decade-not a few months or even a couple of years-could know. Cohen describes Trump's racist rants against President Barack Obama, Nelson Mandela, and Black and Hispanic people in general, as well as the cruelty, humiliation, and abuse he leveled at family and staff. Whether he's exposing the fact that Trump engaged in tax fraud by inflating his wealth or electronic fraud by rigging an online survey, or outing Trump's Neanderthal views towards women or his hush-money payments to clandestine lovers, Cohen pulls no punches.

He shows Trump's relentless willingness to lie, exaggerate, mislead, or manipulate. Trump emerges as a man without a soul-a man who courts evangelicals and then trashes them, panders to the common man, but then rips off small business owners, a con man who will do or say absolutely anything to win, regardless of the cost to his family, his associates, or his country.

At the heart of Disloyal, we see how Cohen came under the spell of his charismatic "Boss" and, as a result, lost all sense of his moral compass.

The real "real" Donald Trump who permeates these pages-the racist, sexist, homophobic, lying, cheating President-will be discussed, written about, and analyzed for years to come.
A #1 New York Times Bestseller!

This book almost didn't see the light of day as government officials tried to bar its publication.

"I read it cover-to-cover. I did not intend to, but I started at the beginning and didn't put it down until it was over."-Rachel Maddow, MSNBC
"I make the finding that the purpose of transferring Mr. Cohen from furlough and home confinement to jail is retaliatory. And it's retaliatory because of his desire to exercise his First Amendment rights to publish a book and to discuss anything about the book or anything else he wants on social media and with others."-Federal District Court Judge Alvin K. Hellerstein

"Trump has tried to stop the publication of unflattering books about him before, including his very recent and unsuccessful attempts to silence his former national security advisor John Bolton and Mary Trump, the President's niece. But the attempted suppression of Cohen's book is different from prior efforts because it uses (and abuses) DOJs hammer of incarceration."-Jennifer Rodgers, CNN

"Was federal law enforcement punishing Cohen because he'd worked on a book critical of the president? Was the White House responsible for orchestrating Cohen's re-imprisonment? Was Team Trump pulling levers to silence the president's former fixer ahead of the election?"-Steve Benen, MSNBC

"Michael Cohen's book to allege Trump made racist comments about Obama and Nelson Mandela, lawsuit says."-Washington Post
Michael Cohen is an American attorney and businessman. He acted as Special Counsel to President Donald J. Trump from 2017-2018 and as Executive VP for the Trump Organization before then. Cohen lives in New York City with his wife and two children.
CIN000843078
9781510764699
1510764690
Disloyal: A Memoir: The True Story of the Former Personal Attorney to President Donald J. Trump by Michael Cohen
Michael Cohen
Used - Like New
Hardback
Skyhorse Publishing
2020-10-23
432
N/A
Book picture is for illustrative purposes only, actual binding, cover or edition may vary.
The book has been read, but looks new. The book cover has no visible wear, and the dust jacket is included if applicable. No missing or damaged pages, no tears, possible very minimal creasing, no underlining or highlighting of text, and no writing in the margins
Trustpilot