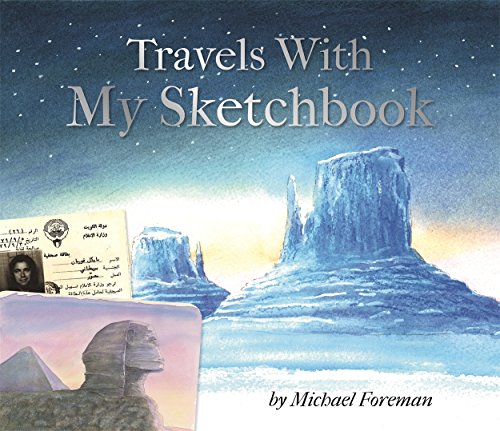 Join Michael Foreman on an incredible journey around the globe. His prolific career as an illustrator has taken him through war-torn Vietnam to the vast forests of Siberia, from Mao's China to Japan, the Arctic to the South Seas and from the top of the world to the bottom of the ocean. Armed with a pencil and watercolours, Michael's signature style captured the sights and sounds of all he encountered. These are his incredible memoirs.

Michael Foreman's numerous books for children have earned him widespread recognition as one of the world's leading illustrators. He has regularly collaborated with Terry Jones, Michael Morpurgo and others while several of his own books are also considered modern classics. Titles include The General, Ali Pasha, War Boy, War Game, Michael Morpurgo's Farm Boy and many more.

GOR008615034
Michael Foreman: Travels With My Sketchbook by Michael Foreman
Michael Foreman
Used - Very Good
Hardback
Templar Publishing
2017-04-20
96
1783704721
9781783704729
N/A
Book picture is for illustrative purposes only, actual binding, cover or edition may vary.
This is a used book - there is no escaping the fact it has been read by someone else and it will show signs of wear and previous use. Overall we expect it to be in very good condition, but if you are not entirely satisfied please get in touch with us.