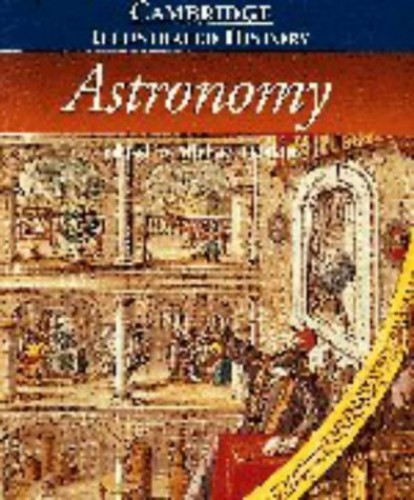 The Cambridge Illustrated History of Astronomy
by Michael Hoskin

Used Price
$60.99
inc. GST
Free Shipping in Australia
Expertly written and lavishly illustrated, The Cambridge Illustrated History of Astronomy offers a unique account of astronomical theory and practice from antiquity to the present day. Packed with anecdotes and intriguing detail, this is a lively and highly visual history of astronomy - a compelling read for specialists and non-specialists alike.
Reviews:
Trustpilot
Very Good

The Cambridge Illustrated History of Astronomy by Michael Hoskin

Expertly written and lavishly illustrated, The Cambridge Illustrated History of Astronomy offers a unique account of astronomical theory and practice from antiquity to the present day. How did Moslems of the Middle Ages use astronomy to calculate the direction of Mecca from far-flung corners of the Islamic world? Who was the only ancient Greek to suspect that the earth might revolve around the sun? How did Christopher Columbus abuse his knowledge of a lunar eclipse predicted by an astronomical almanac? Packed with anecdotes and intriguing detail, this book describes how we observed the sky and interpreted what we saw at different periods of history; how this influenced our beliefs and mythology; and how great astronomers contributed to what we now know. The result is a lively and highly visual history of astronomy - a compelling read for specialists and non-specialists alike.

'... has the weight of authority you would expect from a combination of Cambridge University Press and an author who was formerly head of the Department of History and Philosophy of Science in Cambridge. Everything from Stonehenge to the Hubble Space Telescope, with potted biographies as well as great ideas, good illustrations, a useful glossary and a chronology.' Good Book Guide
'The Cambridge Illustrated History of Astronomy is a book that professional as well as amateur historians of science should have on their bookshelves ... beautifully illustrated ... You will find yourself sitting down to glance at this book and end up reading late into the night ... well written and a wonderful source of information.' Raymond F. Haynes, Metascience
'... a hardbound book of such size and attractiveness for GBP25 is remarkable value ... a volume that historians, librarians and enthusiasts will want to have within easy reach for many years to come.' P. D. Hingley, Astronomy and Geophysics
'... the best account of the history of astronomy in one volume to date.' Albert van Helden, Journal for the History of Astronomy
'The illustrations (both colour and black and white) are not only beautifully reproduced, but opportunity has been taken to use some which have never or rarely been seen before ... This is a book that has been produced at a price that is very reasonable, and I would recommend it to all who have an interest in the history of astronomy.' A. J. Kinder, Journal of the British Astronomical Association
'... well written and a wonderful source of information.' AAHPSSS
'... a most useful and enjoyable book, published at what is, by present-day standards, a very reasonable price. Strongly recommended.' Sir Patrick Moore, Modern Astronomer
'... excellent book.' Martin Ince, The Times Higher Education Supplement
'... beautifully produced, sumptuously illustrated, well organised and accessible.' Allan Chapman, Astronomy Now
'This is a lavishly illustrated and well produced account of astronomical theory and practice from earliest times to the present day.' Aslib Book Guide
'Reading this excellent book will give everyone an understanding of how great scientists work and how their work has produced great astronomy.' Paul Murdin, Endeavour
'... this is a fine volume which treats its topics thoroughly and fills a niche in the current historical literature in astronomy. Considering some of the prices charged now for such books this can be regarded as a bargain and comes highly recommended.' Robert Argyle, The Observatory

GOR002009574
The Cambridge Illustrated History of Astronomy by Michael Hoskin
Michael Hoskin
Cambridge Illustrated Histories
Used - Very Good
Hardback
Cambridge University Press
1996-11-28
400
0521411580
9780521411585
N/A
Book picture is for illustrative purposes only, actual binding, cover or edition may vary.
This is a used book - there is no escaping the fact it has been read by someone else and it will show signs of wear and previous use. Overall we expect it to be in very good condition, but if you are not entirely satisfied please get in touch with us.