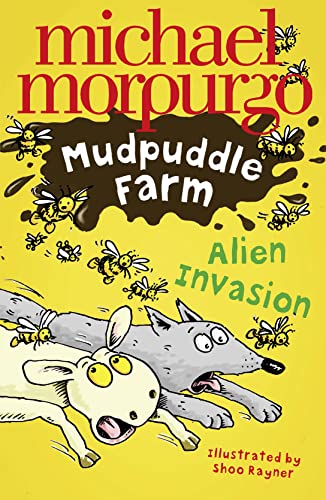 Join the fun on the farm!

A charming story from award-winning author Michael Morpurgo, hilariously illustrated throughout by Shoo Rayner, and perfect for readers of 5 and up.

Join the fun on the farm!

A charming story from award-winning author Michael Morpurgo, hilariously illustrated throughout by Shoo Rayner, and perfect for readers of 5 and up.

Martians at Mudpuddle Farm:
Have Martians landed on Mudpuddle Farm? Farmer Rafferty seems to think so. Now it's up to Albertine, Goose Queen, to work it out. Luckily she's the cleverest goose in the whole world, so if anyone knows what to do, she will...

Mum's the Word:
Something strange is going on at Mudpuddle Farm. Egbert the goat is not himself at all. Instead of grumbling, he's singing and dancing! And he's even greedier than usual...

GOR001652897
Alien Invasion! (Mudpuddle Farm) by Michael Morpurgo
Michael Morpurgo
Mudpuddle Farm
Used - Very Good
Paperback
HarperCollins Publishers
2008-09-01
144
0007275137
9780007275137
N/A
Book picture is for illustrative purposes only, actual binding, cover or edition may vary.
This is a used book - there is no escaping the fact it has been read by someone else and it will show signs of wear and previous use. Overall we expect it to be in very good condition, but if you are not entirely satisfied please get in touch with us.