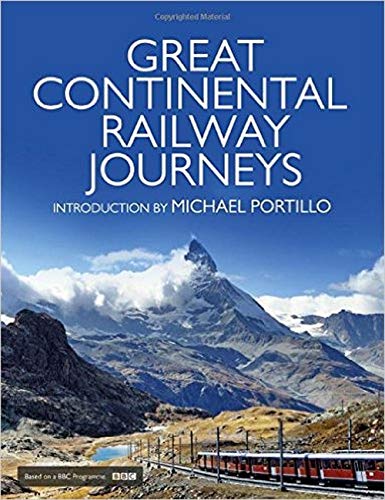 Great Continental Railway Journeysis now a firmly established series on BBC2, following in the illustrious tracks of its predecessor - Great British Railway Journeys. Both series are fronted by ex-politician Michael Portillo and in this European odyssey he travels around continental Europe, using George Bradshaw's1913 Continental Railway Guide. Now coming up for its fourth instalment this autumn, Portillo guides the train-travelling fan across Europe arriving at a myriad of magical and historically fascinating cities we all dream of travelling to by train. From London, to Paris, Bordeaux, Lyon, Copenhagen, Oslo, Lisbon, Madrid, Berlin, Monte Carlo, Prague, Munich, Zurich, Rome, Budapest, St Petersburg; all the way down to Constantinople, Haifa and Jerusalem - Portillo describes the great feats of engineering that built the various railway lines connecting Europe and further afield and the men and women who made these journeys famous through their deeds and words.

The new series (6x1-hour) will transmit in early November 2015, and this book will be the official, lavishly illustrated tie-in covering every single journey Portillo has undertaken across Europe. Capturing all the colour, beauty, excitement and fervour of journeying across this historic continent can muster. A must-have purchase for any armchair fan of unique and award-winning travel programming.

Michael Portillo was an MP for nearly 20 years and held three ministerial positions in the cabinet. He now has a regular weekly television show about politics, and has made documentaries on a range of subjects, including Great British Railway Journeys and The Secret State.

GOR006986514
Great Continental Railway Journeys by Michael Portillo
Michael Portillo
Used - Very Good
Hardback
Simon & Schuster Ltd
2015-10-22
256
1471151492
9781471151491
N/A
Book picture is for illustrative purposes only, actual binding, cover or edition may vary.
This is a used book - there is no escaping the fact it has been read by someone else and it will show signs of wear and previous use. Overall we expect it to be in very good condition, but if you are not entirely satisfied please get in touch with us.