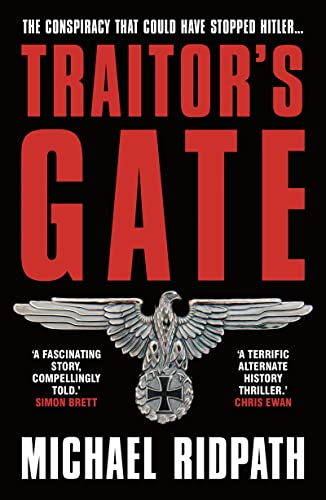 A nerve-shredding, intelligence thriller about the first plot to kill Hitler, from bestseller Michael Ridpath.

Arriving in Nazi Germany, Englishman Conrad de Lancey feels sick at heart. Even Berlin - infamous haven of decadence and vice - salutes fascism. Himmler's black-shirted troops rule the city, and every German arm bears a Swastika. But does every German heart belong to Hitler?

When Conrad is arrested by the Gestapo on suspicion of spying, he is rescued by Theo, an old friend from university, now a lieutenant of the Wehrmacht. Together they are drawn into a world of danger and deceit, of plots, paranoia and intrigue where the brave few are united by a single ambition: to free the fatherland from the Fuhrer.

'Brilliant ... the writing is typical top-calibre Ridpath, the pace relentless, the research impeccable, the characters compelling and beautifully crafted. Every page is a gem' Craig Russell.
'It takes rare skill to inject so much suspense into a story with an outcome we thought we knew, but Ridpath's mix of wonderfully skilled plotting, fast paced narrative and atmospheric period detail combine to make this a compelling and hugely satisfying read' Chris Ewan.
'A fascinating story, compellingly told' Simon Brett.
'A Frederick Forsyth of our time' John Lawton.
'Ridpath's novel carries all the hallmarks of his previous books, with the tension building ever-tighter' Daily Mail.
'A persuasive period-set novel that boasts all the intellectual rigour and sheer storytelling nous that distinguishes Michael Ridpath's best work' Good Book Guide.

Michael Ridpath spent eight years as a bond trader in the City before giving up his job to write full-time. He lives in north London with his wife and three children. Visit his website at www.michaelridpath.com.

GOR005564057
Traitor's Gate by Michael Ridpath
Michael Ridpath
Traitors
Used - Very Good
Paperback
Head of Zeus
2013-12-16
400
1781851824
9781781851821
N/A
Book picture is for illustrative purposes only, actual binding, cover or edition may vary.
This is a used book - there is no escaping the fact it has been read by someone else and it will show signs of wear and previous use. Overall we expect it to be in very good condition, but if you are not entirely satisfied please get in touch with us.