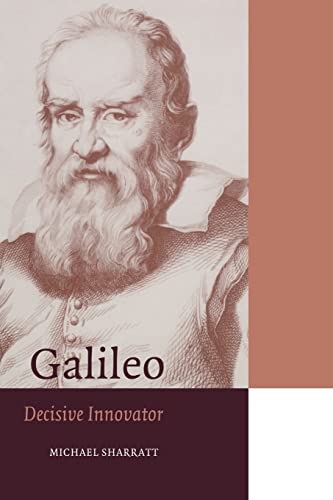 Out of Stock
$23.49
inc. GST
This entertaining biography examines the imagination and penetration of Galileo, path-breaker for the telescope, decoder of nature's mathematics, populariser of science, and the Inquisition's most famous victim. Accessible to non-scientists, this is the biography of one of the greatest innovators ever known.
Very Good
Only 0 left

In this entertaining and authoritative biography Michael Sharratt examines the flair, imagination, hard-headedness, clarity, combativeness, and penetration of Galileo Galilei. To follow his career as he exploited unforeseen opportunities to unseat established ways of comprehending nature is to understand a crucial stage of the Scientific Revolution. Galileo was a path-breaker for the newly-invented telescope, the decoder of nature's mathematical language, and a quite brilliant populariser of science. Even his reluctant excursion into theology has at last been officially and handsomely recognised by the Church's 'rehabilitation' of the Inquisition's most famous victim, fully discussed in the last chapter. This book makes his lasting contributions accessible to non-scientists and his mistakes are not overlooked. This is not a mythical story, but the biography of an innovator - one of the greatest ever known.

'There are many other books which delve deeply and comprehensively into Galileo's life and works ... but Sharratt's volume is an excellent introduction to the man aptly known as the 'father of modern physics'.' Irish Astronomical Journal
"...several details in this biography make our understanding of Galileo's world easier." Seventeenth-Century News
"Most readers will read the last chapter of this outstanding biography on Galileo first. Laying out the contemporary Church's attempt to bring together the two cultures of science and religion into a harmonious relationship of mutual respect, the chapter provides the satisfying closure to the infamous Galilo affair that no other book in the previous three and a half centuries has been able to do." James R. Hansen, Science Books & Films
"Building from a thorough familiarity with the volumes of scholarship on the subject, the author offers an extremely readable reappraisal of Galileo's life and work. Sharratt's book is an excellent addition to the Cambridge Science Biographies series." James R. Hansen, Science Books & Films
"From now on, when I assign a single book on Galileo to undergraduate students, it will be this one." James R. Hansen, Science Books & Films
"In Galileo: Decisive Innovator, Michael Sharratt offers an effective and manageable remedy to the standard schoolbook portrayal of Galileo. Effective, because it outlines Galileo's contributions with an emphasis on ideas rather than anecdotes. Manageable, because it is a succinct account that restricts itself to the salient features of Galileo's arguments and the key events and relationships that shaped his life...Sharratt succeeds in restoring the man behind the myth." The Journal of the Royal Astronomical Society of Canada

GOR001849004
Galileo: Decisive Innovator by Michael Sharratt
Michael Sharratt
Cambridge Science Biographies
Used - Very Good
Paperback
Cambridge University Press
1996-04-11
264
0521566711
9780521566711
N/A
Book picture is for illustrative purposes only, actual binding, cover or edition may vary.
This is a used book - there is no escaping the fact it has been read by someone else and it will show signs of wear and previous use. Overall we expect it to be in very good condition, but if you are not entirely satisfied please get in touch with us.