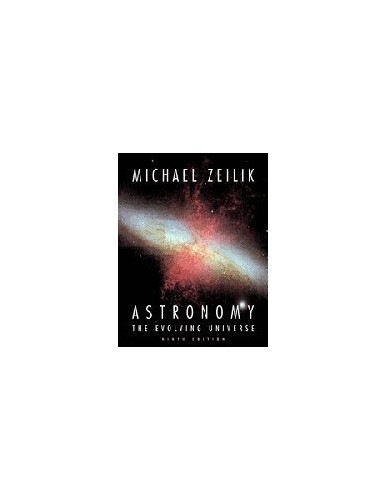 In Stock
$53.99
inc. GST
This highly illustrated textbook for a one-semester introduction to astronomy describes the full range of the astronomical universe and how astronomers think about the cosmos. This ninth edition is more streamlined than earlier editions, presenting only that material needed by students. Each topic is presented in a patient, engaging manner, and includes the latest astronomical research.
Very Good Well Read
Only 2 left

Thoroughly updated and re-conceived, Astronomy: The Evolving Universe, Ninth Edition, equips the introductory astronomy student with the essential tools for understanding the night sky. Michael Zeilik has revised his successful textbook based on recent research in astronomy education. Significantly shorter than the previous edition, the ninth edition is organized into four concept clusters: Cosmic Distances, Heavenly Motions, Celestial Light and Celestial Navigators. Material has been streamlined throughout to make the descriptions, concepts, and explanations clearer. Each chapter ends with a concise summary of the concepts in each cluster. Each chapter contains at least one Celestial Navigator, a map that provides a visual guide of major concepts in the chapter and explicitly shows their connections. Throughout, illustrations have been updated to be clearer and more relevant.

' ... it must rank among the most successful and long-lasting of astronomical textbooks ... likely to be of great bebefit to anyone studying the subject at school, and those contemplating teaching an evening class could do a lot worse than to base their course on this text. it is a first class recommendation not only for the student but also for the interested layman.' Robert Argyle, The Observatory
'Zeilik is an academic who has used his research into astronomy education to streamline and focus his textbook, and his experience is readily apparent. It is well structured, with diagrams on most pages and a number of attractive images. ... Further activities are contained in a companion book and there are other resources available on a linked web site. This book is easy to read and is a good introduction to popular astronomy. Astronomy Now
"A slick introductory textbook that vaguely resembles a really thick Discover magazine. Zeilik...presents each topic in a patient, engaging manner, and even includes some material from his research on astronomy in the historic and prehistoric Pueblo world." Book News
"This is an ideal reference book which can be used in conjunction with lecture material." Astronomy & Space
"The science is accurate and presented in a logical sequence, with concepts stressed more than vocabulary. The photos and figures have been thoughtfully selected and generously sized, and the prose is written in an engagingly colloquial style.... The text continually explains the significance of what the reader is studying.... anyone seeking a good descriptive overview of astronomy at the dawn of the 21st century should certainly consider using this excellent book." Science Books and Films
"...provides a clearly written introduction to astronomy for undergraduates or interested novices. It is recommended for undergraduate science collections, as well as public libraries providing continuing education resourcesin the sciences." E-Streams

Part I. Changing Conceptions of the Cosmos: 1. From chaos to cosmos; 2. The birth of cosmological models; 3. The new cosmic order; 4. The clockwork universe; 5. The birth of astrophysics; 6. Telescopes and our insight to the cosmos; 7. Einstein's vision; Part II. The Planets: Past and Present: 8. The earth: an evolving planet; 9. Moon and Mercury, Mars and Venus: terrestrial planets; 10. The Jovian planets: primitive worlds; 11. The origin and evolution of the solar system; Part III. The Universe of Stars: 12. Our sun: local star; 13. The stars as suns; 14. Starbirth and interstellar matter; 15. Star lives; 16. Star death; Part IV. Galaxies and Cosmic Evolution: 17. The evolution of the galaxy; 18. The universe of galaxies; 19. Cosmic violence; 20. Cosmic history; Appendix A. Units; Appendix B. Planetary data; Appendix C. Physical constants and astronomical data; Appendix D. Nearby stars in the Hipparcus catalogue; Appendix E. Periodic table of the elements; Expanded glossary; Index.

GOR002421965
Astronomy: The Evolving Universe by Michael Zeilik (University of New Mexico)
Michael Zeilik (University of New Mexico)
Used - Very Good
Paperback
Cambridge University Press
2002-01-14
572
0521800900
9780521800907
N/A
Book picture is for illustrative purposes only, actual binding, cover or edition may vary.
This is a used book - there is no escaping the fact it has been read by someone else and it will show signs of wear and previous use. Overall we expect it to be in very good condition, but if you are not entirely satisfied please get in touch with us.